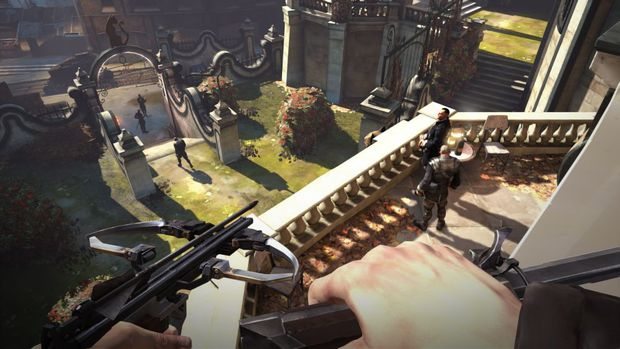 We don’t blame you for thinking our behind-the-scenes trip to Bethesda’s E3 booth to preview Dishonored was simply too good to be true or exaggerated in some regard. A game that allows you to strategically plan your attack for each and every mission, endowing you with a set of uniquely distinct powers and giving you a real element of player freedom? Get real. But it’s true. We verified back at E3 that Dishonored is everything Arkane’s lead developers Harvey Smith and Raphael Colantonio are cracking it up to be. The game’s newest trailer, titled “Daring Escapes,” proves this sentiment once again.

Dishonored is as much about player choice and particular playstyles as it’s about slicing your way through enemy guards to take out your next target. The trailer below will give you a glimpse of a few of Corvo’s powers that were detailed to us back at E3. The first “escape” utilizes the “Blink” power which essentially works as a means to quickly teleport your way across maps and areas while the third demonstrates the usefulness and all around awesome-factor that the “Possess” ability enables. The second escape? Well, if you take pride in not killing your enemies, preferring to hide bodies in dumpsters and take the stealthy route, then this option’s for you. But where’s the fun in that?

Dishonored is set to hit stores on October 9th, and for a more in-depth look at the game’s distinguishing dystopian, steampunk environment that is the city of Dunwall, check out our exclusive interview with lead developer Harvey Smith.