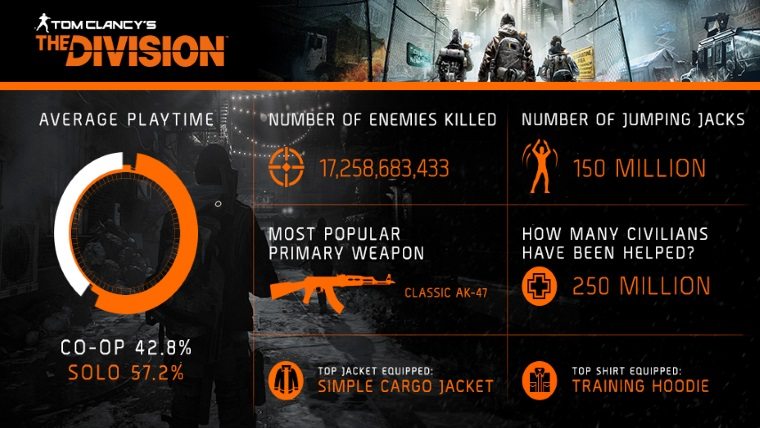 Tom Clancy’s The Division is just over a month old at this point, which means it’s time for Ubisoft to collect some stats and take a look back at how the game is shaping up. The game has been hugely popular, with millions of players picking up a copy. The Division has quickly become one of the best selling games of the year, so the stats are pretty nuts when you look at them all, but one stands out as particularly interesting, given the nature of the game.

Out of all the players that have jumped into The Division, 57.2% of their time has been spent playing the game solo. As The Division is an MMO of sorts, mixing the third-person shooter genre with elements from MMORPGs, it’s a bit odd to see that most players are spending their time by themselves. Still, 42.8% of the time they have a friend around, so it’s definitely up there, even if it isn’t the majority.

Along with this, Ubisoft revealed that 17,258,683,433 enemies have been killed, which is a pretty staggering number. It isn’t all killing though, as 250 million civilians have been helped. Also, the most popular weapon for The Division players is the Classic AK-47, the top jacket is the simple cargo jacket, and the top shirt is the training hoodie. These are all usually found pretty early in the game, which explains their popularity. Finally, 150 million jumping jacks have been performed. How many of these were blocking exits to safe houses we do not know.