The latest news in the world of video games at Attack of the Fanboy
March 2nd, 2017 by Darrin Wright 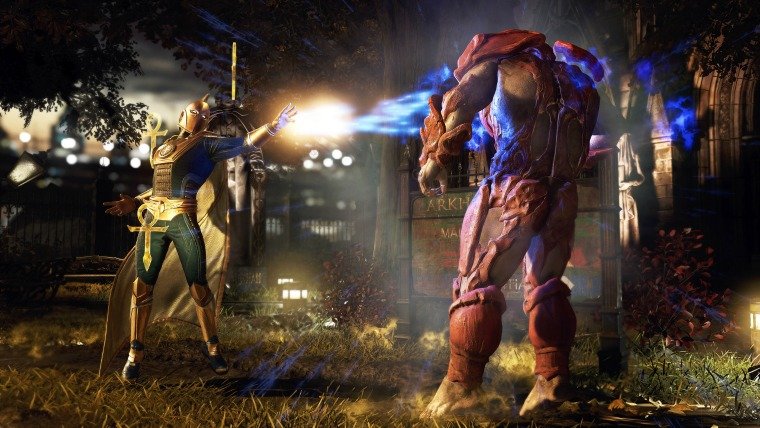 The roster for Injustice 2 continues to grow, and the newest addition is definitely an unexpected one, at least for many. The PlayStation Blog revealed today during a hands-on article that Doctor Fate is joining the DC Comics fighting game’s roster.

For those unfamiliar with the character, Doctor Fate is essentially the DC Comics analogue to Marvel’s Doctor Strange: he’s a sorcerer tasked with the protection of all reality, although at times can prove to be distant to normal folks as a result. Since the story of Injustice 2 revolves around the return of an evil Superman, he’s also most likely the world’s best hope of stopping him, since magic is one of Superman’s very few weaknesses.

The post also went into detail on the game’s “RPG-style gear system,” which allows users to collect pieces of armor or tech to custom-build their own ultimate version of each character, whether by winning them in battles against online or offline opponents, or by buying “Mother Boxes” using in-game currency. Each piece of gear gives you a boost to one of four states: strength, ability, defense, and health.

Each piece of gear can also be equipped with augmentations that let you earn experience points faster or give you even more dramatic strength boosts, and complete sets benefit a character even more. You can also adjust the colors and shades of each piece, so one person’s version of Batman will look completely different from yours.

Of course, those looking for a pure experience online, without worrying about someone else having better armor or states, can do so through the game’s Tournament mode, which keeps the cosmetic changes but leaves each character’s base stats alone.

There are still a few unanswered questions about Injustice 2, but everything seems to be coming together nicely for the game’s May 16th launch on PlayStation 4, Xbox One, and PC. Keep checking Attack of the Fanboy for the latest Injustice 2 updates.