The latest news in the world of video games at Attack of the Fanboy
December 30th, 2016 by Raymond Garcia

Originally released in 1987 for the arcade Double Dragon’s legacy has been almost twenty years in the making. Arc System Works the developers of Double Dragon IV recently gave us something to celebrate with the release of the first teaser trailer for the new game shown below:

Clocking in at just over a minute and a half the reveal starts off with game play footage from Double Dragon I, showing love interest Marian being kidnapped by the notorious Black Warriors gang. This is followed by a montage of flying kicks, punches, throws, and elbow strikes as Billy and Jimmy engage the Black Warriors most fearsome fighters in a bid to win back Marian. This continues showing various parts of the original Double Dragon until about the 1:05 mark, at this point the video cuts to black the screen reads “The legend goes on…”

“The legend goes on…”

What follows is sure to please long time fans of the series, the game play footage for the new Double Dragon IV looks like a modern day NES game with sprites and action similar to that of the original. Billy and Jimmy are shown once again utilizing the moves that made them famous taking out multiple enemies. Also shown is a glimpse of a title screen (shown below) that features multiple modes of play, these modes include: story, 2p duel, a mysterious ???, config, options, and possibly a language select at the bottom. 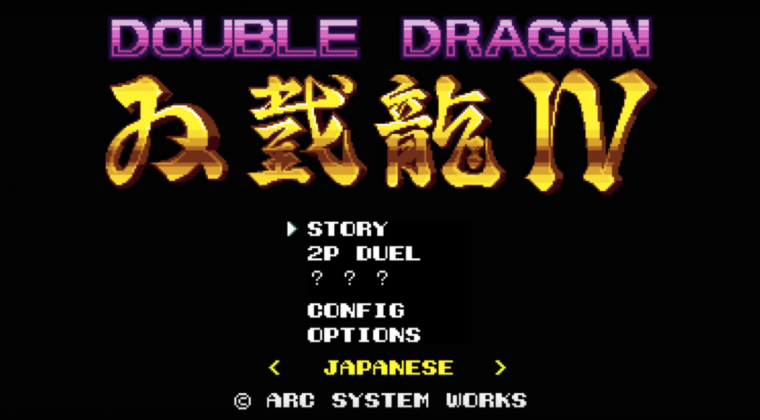 Details such as the story and length of the game have yet to be revealed by Arc System Works, who in 2015 acquired the rights to the franchise. Arc System Works have worked on a large number of fighting games before this which include Guilty Gear, BlazBlue,  and the Persona 4 Arena series. No strangers to flying feet and fists Double Dragon IV looks to poised to back elbow you right in your retro bits. Look for it on PS4 and Steam on January 29th, 2016.