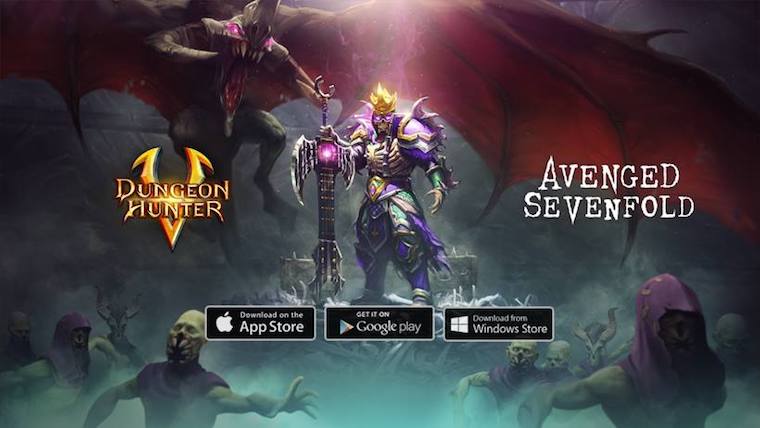 Yesterday, the heavy metal band Avenged Sevenfold and the game Dungeon Hunter each teased on their Facebook pages that they were working together on something. I predicted that it would either be the band providing music for the game or it would be a new Avenged Sevenfold game, possibly a sequel to 2014’s Hail to the King: Deathbat. Well, as it turns out, it’s a little bit of both.

The Dungeon Hunter Facebook page posted an announcement that a new update to Dungeon Hunter 5 is now available called “The Dark Summer,” which appears to be an update themed around Avenged Sevenfold. The update includes A7X-themed items, such as an A7X shield and a guitar axe (it’s a joke, because guitars are sometimes referred to as “axes” in the metal community). The update also contains a new A7X-themed dungeon called the Bat Kingdom. To top it all off, the update includes a completely new A7X song called “Dose.” As of the time that I am writing this article, it appears that playing “The Dark Summer” update is the only way to listen to the song. You can at least hear a snippet of it in the trailer for the update.

Avenged Sevenfold has recently been releasing new songs every few weeks, including a cover of Mr. Bungle’s “Retrovertigo” and a cover of the Mexican folk song “Malagueña Salerosa.” It has been stated that these are two of about seven songs that were recorded during the sessions of the band’s most recent album, The Stage, which came out last year. The band has said that most of these seven songs are covers but that there is one original song in the bunch. It is unclear at this time if “Dose” is that unreleased original song or if it is a completely different original song written specifically for this Dungeon Hunter update.