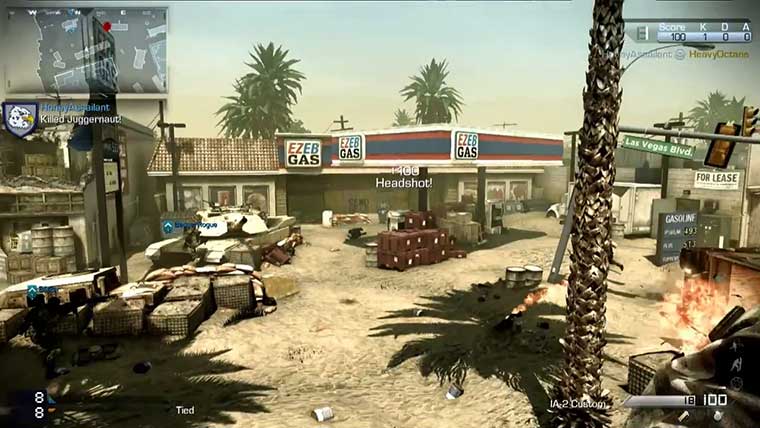 Call of Duty Ghosts from Infinity Ward was available for multiplayer carnage on the Xbox One at the EB Expo 2013 in Sydney last weekend.

Long time fans of the premiere first person shooter series will be happy to know that the gameplay is as snappy and twitchy as it has always been, running at a smooth 60 frames per second without ever wavering. The auto-aim did seem to be toned down a little in comparison to previous installments and I never really felt my aim sway as an enemy entered my field of view.

The updated graphics were pleasant but apart from an increase in the resolution of textures and model fidelity, the updated next-gen engine felt almost exactly the same as it always has. Fast, pretty enough and brutal.

Gameplay for the Call of Duty Ghosts multiplayer demo took place on a bombed out and dusty street (surprise surprise!) in the new Blitz mode of play. Blitz puts a spin on team deathmatch by placing a “portal” at either side of the map, one for each team. Your team must defend your own portal while trying to reach the opposing teams portal on the other side of the map. If you manage to reach the your enemies portal you gain a point and are teleported back to base as the round begins anew.

As with any shooter on display the available loudouts and perks to try were sadly extremely limited. I was lucky enough though to be attacked by a few angry German Shepherds and bad guys sporting juggernaut armor as I was mercilessly slaughtered by my enemies whose average age was a good ten years below mine and average skill level was far above my own. Without their own guns however the German Shepherds did not stand a chance.

Call of Duty is a like it or hate it kind of series these days and Ghosts looks unlikely to change that, but they say war never changes and Call of Duty Ghosts proves that statement true as always.

Call of Duty: Ghosts Xbox One
We're Looking For Contributors