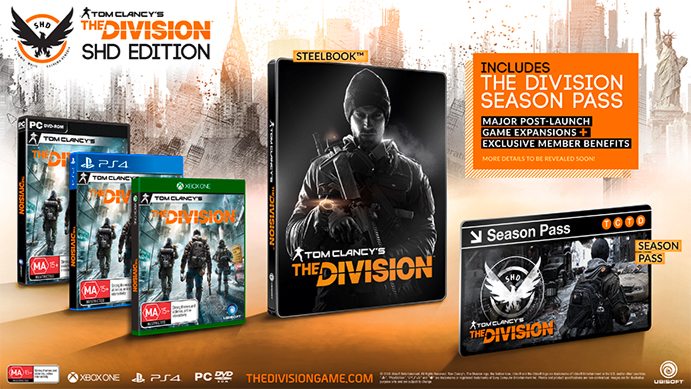 EB Games has just revealed an exclusive version of Tom Clancy’s The Division which is being dubbed the “SHD Edition”.

This version of the game is not elaborate as other editions, but it offers some things not available elsewhere. The SHD Edition of Tom Clancy’s The Division is exclusive only to EB Games.

Both EB Games Australia and EB Games Zealand have this in stock. In Australia, it will cost you $AUD149.95 and in New Zealand it will set you back $NZD159.99. It will be available for purchase on PC, Xbox One and PS4 with the PC version costing $10 cheaper.

This version of the game is worth getting if you are keen on getting the Season Pass. The game will be supported with lots of DLC post-launch.

Tom Clancy’s The Division is kind of like Ubisoft’s answer to Destiny. It is a third-person shooter at heart, but there is a huge open-world environment for you to explore plus other online players for you to meet. The game will be released worldwide on March 8th, 2016.