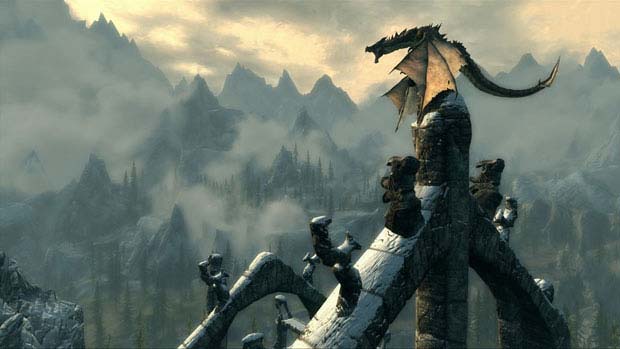 Elder Scrolls V Skyrim is now just nine and a half months away..weee.  The previous game Oblivion was the one of the first games that really ushered in the next generation quite a few years back.  From all accounts, Skyrim is shaping up to have this same feel to the game.  Adding beefed up graphics and a sweet new engine, Skyrim is expanding many of the core features of the game, but what about the gameplay you ask?  Details have been pretty slim up until now, but some of the latest details from Skyrim describe the Dragon Shouts, collectible powerups that you earn throughout your time in the Elder Scrolls world.

The name may sound a little off but as far as their ability, they hit the nail right on the head.  Added in as a complement to the game’s magic system, everytime that you defeat a dragon in Skyrim you will absorb their soul for your victory.  Earning these souls is the source of increasing your characters power.

Each Dragon Shout is made up of three words with three levels to earn for each shout.  There is said to be sixty words to collect, making that 20 dragon shouts in total.  Not much has been released on as far as the details of the powers, but I say leave it a surprise that’s part of the fun of a game of this nature.  You can imagine the possibilities in place though.