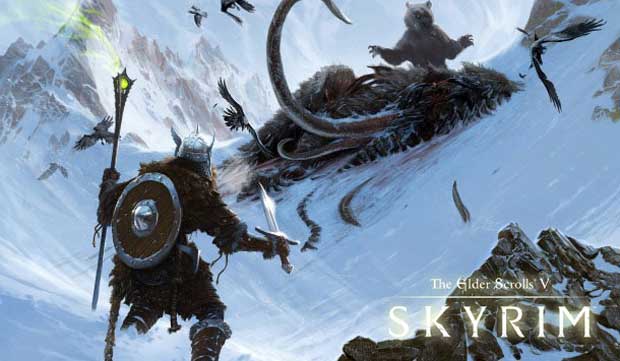 New info on the The Elder Scrolls V Skyrim story & graphics have recently hit the nets.  In this recent interview Elder Scrolls V Skyrim fans are treated to never before seen info from Bethesda.   The magazine featured producer Todd Howard and he touched on many subjects in the realm of Skyrim here are a few excerpts of the interview.

As far as graphics are concerned Howard told the magazine that Bethesda had a specific goal in mind for updating Skyrim.  “We primarily look at how we can improve facial expressions and animations, graphics-wise, the producer said.  He continued, “We are working at pop-up issues, and we want to make sure that the graphics of the PC, Xbox 360, and PS3 are alike.  All three will look just as good, aside from the higher resolution and the anti-aliasing of the PC of course.”  It was also noted that the inventory menu has gotten a bit more polish, flash based previews which allow you to rotate and examine all items in the game from weapons and armor to accessories and ingredients.  This feature will also aid in puzzle solving portions of the game.

The world of Skyrim, is said to be approximately the size of Oblivion.  The world is equipped with fast travel locations much like its predecessor allowing you to fast travel to locations you have previously visited.  The game contains five major cities and 130 dungeons with each one featuring a greater variety of traps and puzzles.  Skyrim will not feature a level cap.  From the first time you visit a dungeon in Skyrim that specific dungeon will lock to the skill level you entered at.  Which will give you access to go back for level grinding and loot gathering.  The main story in Skyrim provides around 20 hours of gameplay, and side quests are said to provide “hundreds” of hours to the experience.  Dragons are NOT rare in the world of Skyrim.  Each dragon you encounter will make your character more powerful adding a piece of it’s soul to your character and unlocking dragon born abilities.