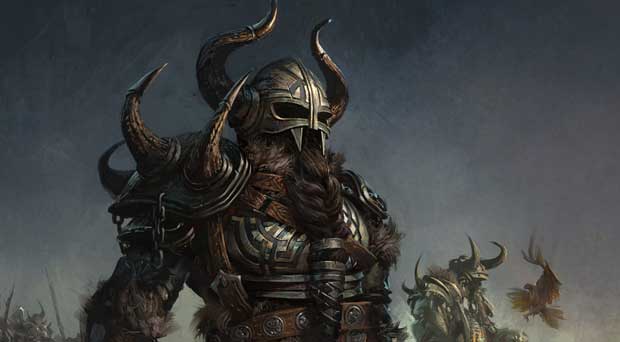 In a recent interview the Art Director for Elder Scrolls V Skyrim got into the extreme details of the changes in the graphics for the game.  Matt Carofano walks us through the development process of the art and how the overall direction for Skyrim was achieved. In Elder Scrolls V the visual direction is intentionally much different than in Oblivion.  Oblivion was rooted in “European Fantasy”, and the developer notes that we should expect a much different world in Skyrim.  Being that it’s “the home of the Nords” everything is based of this reality.

And that reality is described as an “Epic Reality”, featuring “dramatic views wherever you go”.  The developers goal is stated at having the player amazed at each and every turn in the game.  Alongside the environments, Character models will be much more unique than in the previous games. Detailed modeling techniques will have you able to  tell the differences between races and allegiances at a glance.  New systems for decals and scars, distinguishing features, make this possible.

The enemies of Skyrim will also be unique and believable.  The creatures rooted in the areas they are encountered “make sense” for their locations and behaviors.  Ultimately the world of Skyrim will define what creatures you encounter on your journey and not the other way around.

At the end of the day Carofano adamantly tells of how Skyrim has the “more concept design than any other game Elder Scrolls Game”, every piece fits the game’s universe in a unique fashion, right down to the most intricate details.