The latest news in the world of video games at Attack of the Fanboy
December 12th, 2016 by Damian Seeto 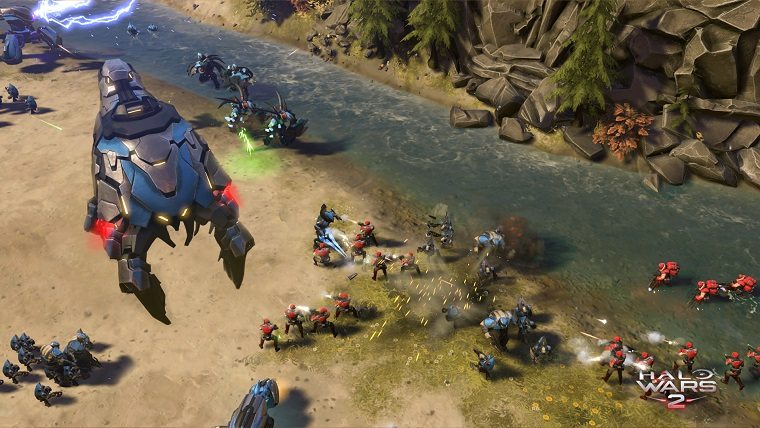 The ESRB has now rated Halo Wars 2 this month on its official website. It tells us the kind of violence you may see in the full game among other details.

Halo Wars 2 has been rated T for Teen. The content descriptors say: “Mild Blood, Mild Language, Violence”. The game is available for both the PC and Xbox One.

The rating summary says: “This is a real-time strategy game in which players build and command military units in order to defeat opponents and complete combat objectives. From a ¾-overhead perspective, players collect and manage resources to mobilize/upgrade military units (e.g., infantry, armored vehicles).

Combat is highlighted by realistic gunfire, explosions, and cries of pain. One cutscene briefly depicts blood spilling out of a stab wound; another scene shows bloodied injuries on a soldier’s face. A handful of cutscenes depict soldiers shooting or stabbing enemy aliens. The words “b*tch” and “a*s” appear in the dialogue.”

Halo Wars 2 has been in development for quite some time and serves as a sequel to the RTS original that came out back in 2009. Even though Halo is known to be a FPS franchise, the first game did quite well even though RTS style games are not common on consoles.

This time though, the sequel is released simultaneously for the Xbox One and Windows 10 PC. Both The Creative Assembly and 343 Industries are working on the game. Development started back in 2014 with a release date of February 21, 2017.

In terms of the game’s story, it takes place almost three decades after the first game and a few years after Halo 5: Guardians. Don’t expect to see the main characters in this game as they only appear in the main entries.

Anyway, are you looking forward to Halo Wars 2 or are you skipping it until Halo 6 is eventually released?