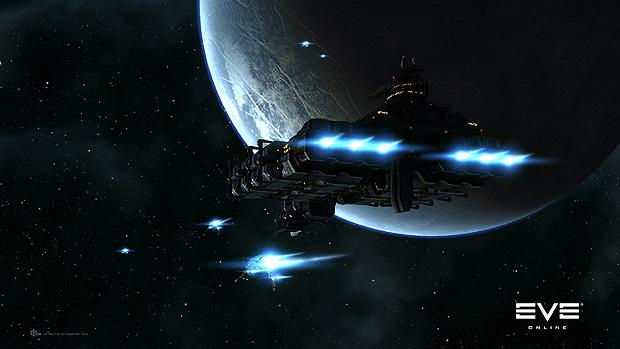 If you’ve ever played EVE Online or know someone that does, then you also most likely know that the vast MMO set in space with a galaxy comprising more than 7,500 star systems has one of the most dedicated and fervent followings of any game currently being played. Seriosuly, some EVE players are so passionate/friggin’ crazy that they are willing to go to whatever means necessary in order to find new methods of scamming, deceiving, and attacking each other. Have a look at this article originally published in the September 2005 issue of PC Gamer and you’ll see exactly what I’m talking about. Ingenious really, but friggin’ crazy.

CCP, the publisher of the game, recently planned to add microtransaction options to the EVE universe. Players became immediately concerned whether or not these items would have an effect on gameplay. The publisher reassured users that the items would be for vanity purposes only and that they wouldn’t alter gameplay in any way. The new Noble Exchange cash shop went live recently and the store did in fact only contain only vanity-releated items such as a series of alternative clothing options.

The publisher’s decision to release the items was one thing, making EVE players pay out the ass for them has now become something else all together. The current prices on the items in the Noble Exchange shop are exceedingly high for microtransactions of this type. The items are bought with a new currency called “Aurum”, 3500 of which can be created from one 30-day pilot’s license (PLEX). With the price of PLEX set at around $19.95 US, players who want to alter their character’s cosmetics will be forced to pay over $20 for a skirt, $25 for a blouse, and a ridiculous $68 for a pair of monocles.

The prices for these vanity items currently cost more in the EVE universe than if one were to buy them in the real world, and apparently that fact is not sitting well with players. Thousands of EVE users are holding demonstrations in the game’s two main trading hubs, Jita and Amarr, in protest of the shop and of the absurdly high prices. Players are reportedly firing upon a memorial statue and are attempting to lock the trade centers, in-turn crippling the game’s economy. Fuel was added to the fire when a CCP internal newsletter, which was supposed to stir a debate between employees on whether or not it was a good idea to add in microtransactions, was leaked to the public. The newsletter was reportedly titled “Greed is Good?” and only enraged players more as they saw a deliberate attempt by the developers to cash in on the passionate following that has developed around the game.

It’ll certainly be interesting to see how this situation plays out and whether or not it gets resolved or only further gets worse. If I were CCP, I’d think about simply pulling the shop and the items altogether, effectively abandoning any profit that they hoped to gain from them. If CCP comes away from this ordeal with one lesson, it should be this: when you announce the release of in-game “microtransactions”, make sure you come through on the “micro” aspect.