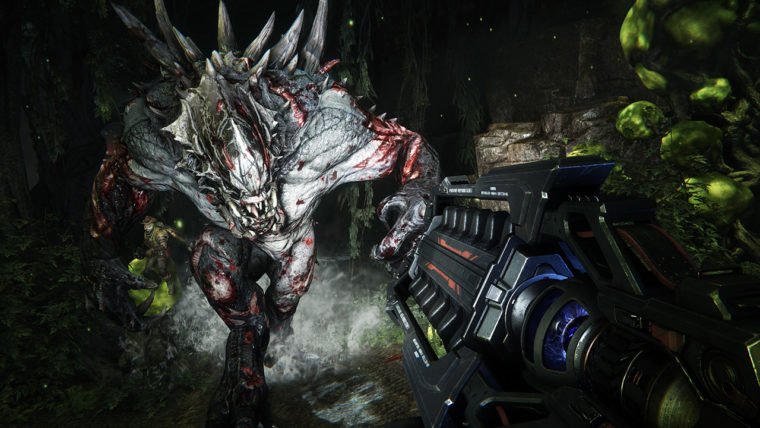 Evolve, the new 4v1 multiplayer shooter from 2K Games and Turtle Rock Studios, looks to have an extremely generous model of DLC planned. The game will ship on February 10th with a decent amount of content, but it has been obvious from the beginning that DLC would play a big part in the game’s future. However, this always runs the risk of splitting the community between those who pay more and those who don’t, often leading to a worsened experience for everyone. Evolve looks to avoid this with the plans they have previously talked about and went into greater detail on today, which include free maps for everyone and the idea that no one should get booted for not paying.

The best part is the aforementioned free maps, which will be available to all players at any time. This is meant to avoid the problem of the split community, and seems like a great way to do it. But if Evolve’s maps will be free, what will actually be paid for? Those will be the additional Monsters and Hunters that players can use to do battle. However, this too could fracture the community, leading to some servers full of new content and leaving non-payers out in the cold.

The developers are getting around this by allowing anyone to play together regardless of the content that they own. Players who only have the base game will still be able to play against those that have bought, and are using, the DLC content. The only downside to not paying is that you won’t be able to actually play as the optional characters.

There will be plenty of purchaseable DLC offered for Evolve, such as the newly announced Hunting Season Pass, but if you don’t want to shell out extra money for new Hunters and Monsters then that is fine. As far as what you can buy, “The Evolve Hunting Season Pass contains four new Hunter characters (one from each class), as well as three new Monster skins (Magma Goliath, Magma Kraken and Magma Wraith.) and will only cost you $24.99”.

Evolve will be available on PS4, Xbox One and PC on February 10th.