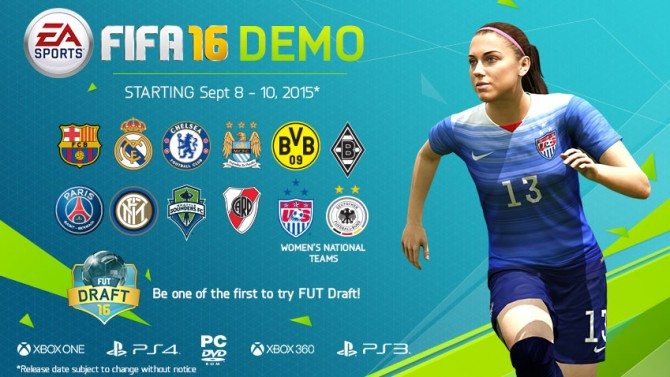 EA Sports has now announced all of the details on the upcoming FIFA 16 demo coming in September.

The FIFA 16 demo will be playable from September 8th, 2015 for PC, PS4, Xbox One, PS3 and Xbox 360. There are numerous teams you can play plus some other modes too.

In addition to these clubs, two women’s national teams are also playable in the demo too. You can play as Germany and the United States. This is the first time female players have been added to the FIFA series.

As for features, the Kick-Off mode is where you can play an actual match in the FIFA 16 demo. Also available is FIFA Ultimate Team Draft. The full game this mode is playable online, but the demo will only allow you to play against the A.I.

To top off an already generous demo, there is also FIFA Trainer mode so you can test out your skills in a training session scenario. This mode is good to play if you have never played a FIFA game before.

FIFA 16 will be available from September 22nd in North America and September 24th in Europe.