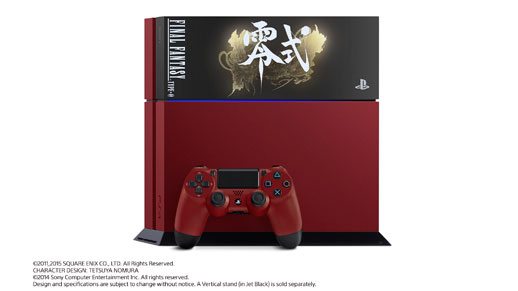 The special Final Fantasy Type-0 HD PS4 console was announced at the Jump Festa event this weekend. Not only does it have special branding, but you also get a copy of the game. The DUALSHOCK 4 controller is also colored maroon too. You also get a 15 day PS Plus trial to go along with that as well.

The Final Fantasy Type-0 HD PS4 console has a 500GB hard drive as well. It comes out in Japan on March 19th which is the same day as the game arrives. There was no mention if it comes with the Final Fantasy XV demo was well, but one would think that it would. Hopefully a Western release is announced for this cool looking console too.

Speaking of Final Fantasy Type-0 HD, there is also a new trailer that has been released for it. The ESRB rating shows it is “M” for mature. Square Enix has said in the past this is one of the more darker games of the Final Fantasy series. Expect the game to be more mature in terms of its content and themes.

Even though Final Fantasy Type-0 HD gets a PS4 console, the actual game itself will also be released for Xbox One owners too.