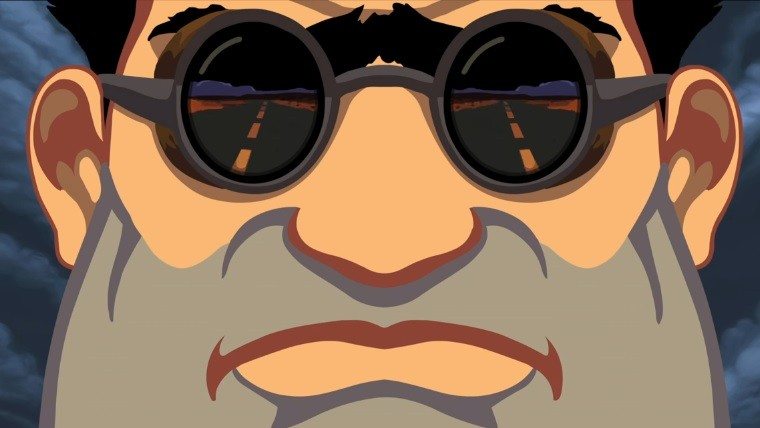 The remaster of the adventure game called Full Throttle was originally announced at least year’s PSX event, giving us a small taste of what was in store before talk of the game died down again. However, a year has now passed and Full Throttle Remastered has gotten a new trailer to commemorate it being playable at this year’s PSX event. This one is called the First Look trailer, and you can check out it for yourself at the bottom of this post.

The trailer is just over a minute long, but that’s all it takes for the game to charm you with its fantastic visual design and characters. For those who don’t know, the game is a graphic adventure game that follows a biker gang leader named Ben. Ben is wrongly framed for the murder of a beloved motorcycle manufacturing mogul, which results in him setting out on an adventure to clear him and his gang’s names.

The game originally launched in 1995 and was Tim Schafer’s first game as project lead and lead writer/designer. This remaster includes brand new hand-drawn and 3D high-resolution artwork, as well as remastered music and dialogue. The game will also allow players to switch back and forth between the remastered and original versions of the game on the fly, while also being able to “mix-n-match” audio, graphics and user interface options.

There had actually been plans to release a sequel back in the day, which was set to be called Full Throttle: Payback. Despite the early goings of development getting positive feedback from LucasArts, disagreements eventually arose on the game style that lead to the game eventually being canceled. Full Throttle: Hell on Wheels was also briefly in development in the early 2000s, which was set to have a heavier emphasis on action and fighting rather than adventure. However, that game was also canceled abruptly, with poor graphics and the lack of Tim Schafer’s involvement being the main reasons.

While Full Throttle Remastered does not yet have an official release date, it is expected to launch for the PlayStation 4 and PC at some point in 2017. You can check out the PSX First Look trailer below.