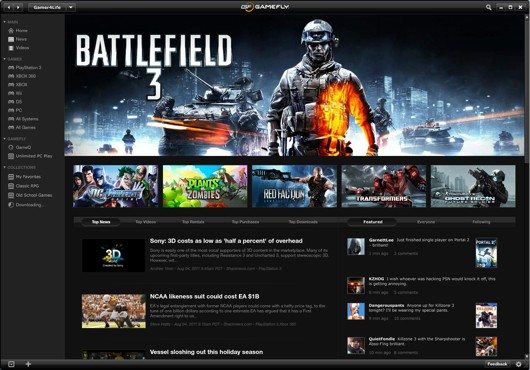 All of you PC gamers officially no longer need to scoff at GameFly’s lack of options for you. The online video game rental service will be launching a new digital client this holiday which will incorporate an “Unlimited PC Play” service. It will allow subscribers to download and play more than a hundred PC and Mac games, adding to the 8,000 console game library that the service boasts. Subscribers to GameFly will be able to gain access to these games for no additional cost, though in the case that you should cancel your subscription, the games you downloaded would no longer be playable.

The announcement comes after GameFly’s acquisition of IGN’s digital game retailer, Direct2Drive, so the new client will be the next step for the service should they attempt to compete with other digital platforms such as Steam and EA’s Origin.

GameFly co-founder, Sean Spector, stated that the company hopes to continually add willing publishers to the list of participants: “We’re talking to all publishers about participating. Several have been signed, but we’re not announcing at this time. In the ‘Unlimited PC Play’ portion for GameFly subscribers, we expect to have over a hundred titles available for the beta launch, but we’ll be adding to the list constantly and should have hundreds at the time of our holiday launch.”

Spector did state however that gamers would have to wait for a digital-only subscription, similar to the choice that Netflix is adding to their subscription options: “We currently have no plans to offer a digital only subscription, as we believe the real value to gamers and our members is our unique combination of console and digital PC game offerings.”

GameFly will launch a closed beta for the client on September 8th at an event in Los Angeles where attendees will receive a beta code for themselves and a friend. No word yet on whether or not there will be a beta open to the public.