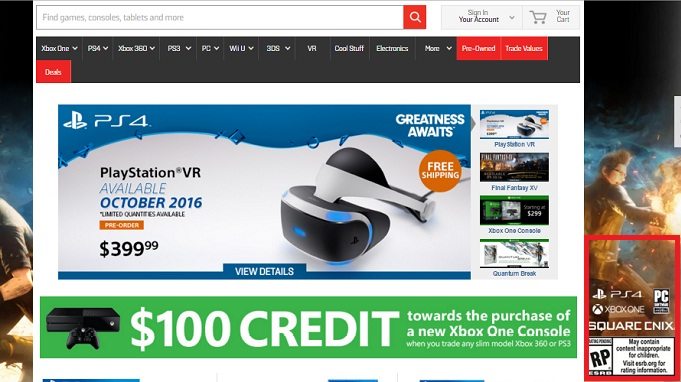 If you visit Gamestop’s website right now, the advertising banner shows that Final Fantasy XV will eventually be released for the PC platform.

As you can see from the screen capture we grabbed, you can clearly see the PC logo at the bottom of the screen. However, the interesting part is that you cannot pre-order the PC version of Final Fantasy XV just yet at Gamestop.

Gamestop also gave a description of the story: “Deception and treachery has shattered the promising truce that would’ve ended the long shadow war between the mystical kingdom of Lucis the militant empire of Niflheim. The world’s last crystal is gone, taken by Niflheim agents as they launch simultaneous attacks on their neighbor nations.

Noctis, Prince of Lucis, sets out to stop the empire and reclaim his home’s crystal, the source of their magical power and protection. Will he and his friends be successful in their quest? What will this dark, new world reveal before the final act?”

It’s possible the PC version won’t be out on September 30th, 2016 which is why it wasn’t announced during today’s event. For now, we’ll just have to wait and see when Square Enix makes an official announcement for it.