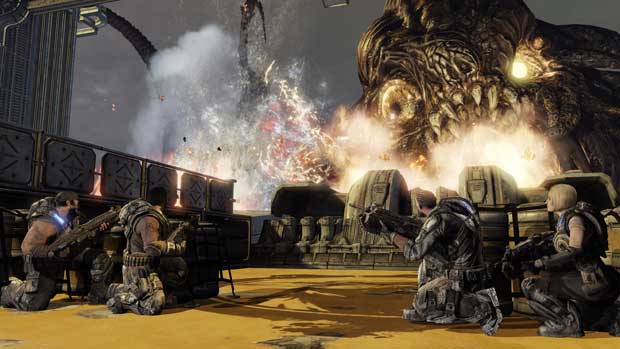 Gears of War 3 is the most anticipated shooter of 2011 with massive amounts of pre-orders stacking up ahead of launch is Epic the real successor to Bungie’s Halo franchise?  Xbox 360 gamers are getting their ducks in a row, for the console exclusive, and for good reason.  From everything we’ve seen thus far, this looks to be the best Gears of War in the franchise’s history.  The game which recently concluded a month long multiplayer beta, got gamer’s frothing at mouths for more of the violent shooter, and more they got.  E3 2011 showed off even more from the crew at Epic, a more cinematic single player campaign with a brand new story telling mechanic, as well as new cooperative modes to extend value even further.

There’s no doubt that the developer is going big with Gears of War 3, and the developer believes that Gears of War 3 can push into Halo territory in terms of popularity among gamers on the 360.  Head of Design at Epic Games, Cliff Bleszinski recently spoke about Gear’s chances to dethrone some of Microsoft’s most popular games on the Xbox 360.

“I don’t think we can hit CoD numbers, because that’s such a phenomenon, but I’m hoping we can get close to Halo numbers.” “The thing about those franchises is that they’re wonderful and they’re established – but they’re also two or three games ahead of us. We’re only on the third game of the series. There’s a few more Call Of Dutys and Halos under their belt.”

Gears of War stormed the Xbox 360 scene with the original Gears of War, but with lofty expectations behind Gears 2, the developer feels like it failed the fans for some of the problems with the multiplayer component of the game.

“This is one thing where you have to train the audience and build them up with continually consistent products – and we’re still fighting off that perception from Gears 2’s online being broken, honestly. That’s been a big pain in the ass for us, and rightfully so – because we screwed up.”  “By doing the beta, we’ve ironed out a lot of those online issues, the dedicated servers are just a wonderful thing to actually have in the game – and I believe all games need them now. Shooters, in particular.”

Gears of War 3 will launch this September, as the first AAA core exclusive game the Xbox 360 has had in 2011. If one thing is for sure, there’s plenty of pent up demand from the 360 crowd, now about that supply, I’m sure Epic’s got it covered.