Gears Of War 4 Crossplay Coming To Ranked Play This Year

The latest news in the world of video games at Attack of the Fanboy
April 12th, 2017 by Mike Guarino 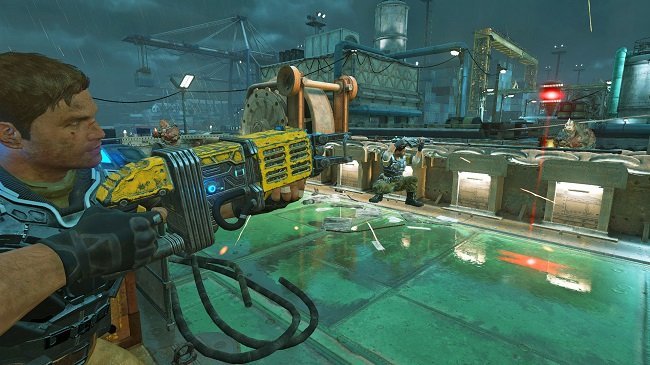 Gears of War 4 already had crossplay support for versus social quickplay, but things will be turned up a notch for the game this year. The Coalition has announced that the popular feature will be coming to the game’s ranked play later this year, in an effort to try and improve the overall player base.

Developer The Coalition revealed in a post today that the addition of crossplay social between the Xbox One and Windows 10 versions of the game didn’t turn out at as great as expected. They said that “our players on Windows 10 flocked to the playlist to play in the broadest playerbase possible. Since that time, Windows 10 players have found it increasingly difficult to find matches in Core and Competitive, so we’ve been working on solutions as quickly as possible to provide an improved experience on the platform. Today, we’re excited to announce a series of updates to unlock Core and Competitive play for our fans on Windows 10!”

This will begin with an update today that will provide a more focused ranked play experience for PC players, funneling them into specific playlists for a better chance at getting matches. This will essentially be a temporary fix that will give the developer time while they work on the permanent ranked crossplay feature. Windows 10 players will have the following playlist setup today:

The developer goes on to say that later this year they will be adding a new Ranked Crossplay toggle for Xbox One players, giving them the option to play with or without Windows 10 players. However, the toggle will not be available in the Windows 10 version, as the developer wants “to make sure Windows 10 players can experience any Ranked Playlist.”

A specific release date for the ranked crossplay feature has not yet been decided by the developer, but they note that they hope to have it ready in the months to come.