God Mode is a new shooter from Atlus 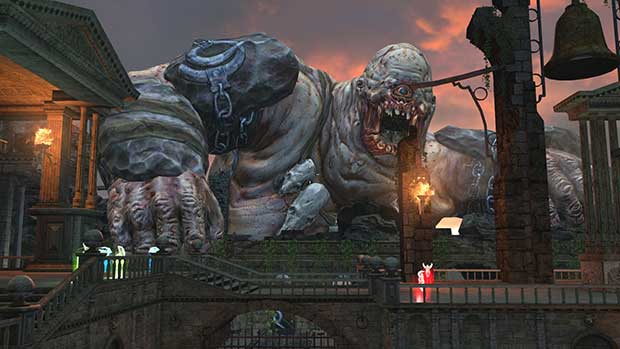 The publishers behind Catherine and the Persona series have revealed “God Mode”, a new cooperative third person shooter from Atlas. Developed by Old School Games, God Mode is described as an “arcade-style four-player co-op shooter” that will feature customizable characters, upgradeable weapons, and special abilities.

The company recently launched an official website for the shooter, where it lays out more details for the upcoming game.

“Sorry for the bad news: You are dead. But all is not lost, as in purgatory that you now find yourself, you have a chance at redemption and eternal life. All you need to do is survive The Maze of Hades.

You are a descendant of an ancient god whose bloodline has been banished from Mt. Olympus by Hades and turned into mere mortals. To avoid an afterlife of eternal damnation, you must battle through this purgatory against an army of the undead and reclaim your place in pantheon.”

DECEMBER 20, 2012 — ATLUS, a brand of Index Digital Media, Inc., today announced God Mode™, a new third-person shooter set for official release in North America in early 2013 for PlayStation®Network, Xbox Live Arcade, and PC. Developed by Old School Games, a new studio working in close collaboration with Saber Interactive, God Mode brings together a visceral shoot ’em up with elements of an RPG, all set in a humorously dark view of the afterlife. Players take on the role of a descendant of an ancient god who is turned mortal when his family is banished from Mount Olympus. Each is tasked to battle through the Maze of Hades in the underworld to seek redemption and reclaim their place in the pantheon. Priced at $9.99 MSRP, God Mode fulfills Old School Games’ goal of delivering high quality, low-cost downloadable titles in an effort to change people’s perceptions of what digital games can truly offer.

“At ATLUS, we’re constantly looking at ways to broaden the scope of content we deliver to our fans and God Mode presents another high-quality product in our line-up, delivered at a price point that will appeal to a wide range of gamers,” said Tim Pivnicny, Vice President, Sales & Marketing, ATLUS. “We’re introducing an exciting third-person shooter that looks like a retail product, tied together with gameplay features and cooperative play like no other downloadable title has done.”

God Mode combines non-linear gameplay, fast and frantic shooting, hordes of on-screen enemies, and stunning visuals. The game hosts a single-player mode, as well as online and offline (via LAN) co-op play with 1-4 players. In addition to accessing more than 11 different weapons for battle, players are also equipped with a special ability fueled by Rage, which is gathered by amassing kills. Players can choose from several different powers ranging from offensive, to defensive, to support; all of which can be upgraded. A series of in-game modifiers known as Tests of Faith alter gameplay on the fly and ensure that matches rarely–if ever–play out the same way twice. Each character is fully customizable, both in appearance and equipment, which evolve throughout the game. Gold and experience are accrued by players in a reward system to unlock new weapons and unique, powerful abilities, both of which have the option for further upgrades.

God Mode is rated M for Mature by the ESRB. For more information, please visit http://www.atlus.com/godmode.