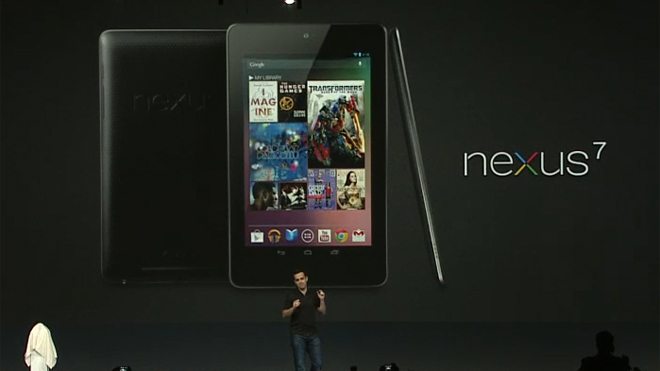 We’ve finally hit that inevitable point in which we can cross off the tablet market as one of the few technological areas Google has left untapped. Today at the company’s annual “Google I/O” developer conference, executives revealed the Nexus 7 along with the newest version of its Android operating system – version 4.1, aka “Jelly Bean.”

While the unveiling of the Nexus 7 may not have been completely unexpected as rumors of the Google tablet have been swirling around for quite some time, its specs unquestionably wowed prospective developers in the audience. Built by Asus, the Nexus has a 1,280 x 800 display with a 1.3Ghz quad-core CPU and chipset from nVidia. The spec that perhaps jumps out the most is that astonishing 12-core Tegra 3 processor. If that means nothing to you, put it in perspective: your computer, if you’re lucky, is probably running with four.

Here’s a quick look at the Nexus 7 tech specs:

While Google’s new Nexus 7 will undoubtedly compete with Apple’s popular iPad, the Nexus 7 is quite obviously looking to sway consumers directly from the path of Amazon’s Kindle Fire. The Nexus 7 8GB will go for $199 (the same price as the Fire) with the 16GB priced at $249. Comparing the two products at similar price, the Nexus 7 demolishes the Fire simply in terms of technical capability. However, Amazon has marketed the Fire as a device that sells itself through its vast array of digital content options. Yet the Nexus 7 is built with Google Play in mind, the company’s digital distribution and multimedia content service. With the help of Google Play, “more than 600,000 apps and games, millions of eBooks and songs, thousands of movies, and a growing selection of TV shows and magazines” will be at your disposal, and for a limited time, purchasers of the Nexus 7 will get $25 in Google Play store credit.

Google also announced updates to its search engine. “Google Now” will collectively retain search information and results to quickly and more effectively refine your search. It updates in-real time, allowing you to react immediately to whatever it is you’re searching for.

Just from what we can gain from today’s unveiling, Google is not only providing a more powerful Android tablet, they’re doing so at the same price as the competition. Apple and Amazon are certainly taking note of this as we speak and are sure to respond with an appropriate business plan in the coming weeks. Will we see a price slashing of the iPad 3 and Fire in the near future?

Check out the introduction video of the Nexus 7 below: