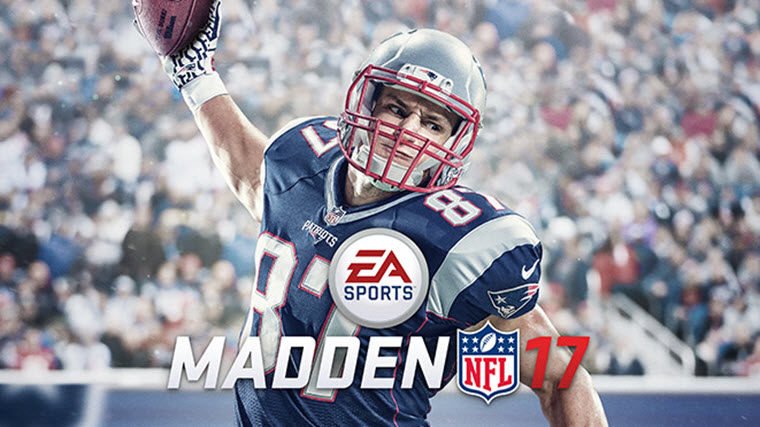 EA Sports made the Madden NFL 17 cover with New England Patriots Tight End Rob Grownkowski official Thursday. The PlayStation 4 and Xbox One football sim reveal came on ESPN’s Sportscenter following a leak from the Xbox website earlier in the day.

The cover of Madden NFL 17 is the in many years that was not chosen by fans through a vote. It features Gronkowski spiking the ball in the end zone.

Gronkowski’s Twitter reaction was to post the Madden NFL 17 cover image with a link to the Gronk Nation website and commenting, “It’s Official! What an honor it is to be the cover of @EAMaddenNFL”

A trailer for the game was also posted to YouTube featuring the Patriots Tight End taking a shovel pass on a field goal fake and then running, leaping, and bulldozing his way in for a touchdown. Naturally, the opponent was the AFC East division rival New York Jets.

Meanwhile, EA Sports shared an overview of the new features that have been added for Madden NFL 17. Offensive players have been given a new “tiered system” of moves based on their attributes, rating, and speed.

“Expect your bigger bruising backs to be more effective with truck moves and stiff arms, while smaller, shiftier backs have more effective jukes and spins. Now don’t worry if you’re not a magician yet on the sticks.”

“New Gap Play AI brings a new level of NFL authenticity and strategy to your defensive teammates. Each of your teammates has a gap assignment on run defense that puts them in position to better defend the run. Force defenders protect the outside of the field, pushing the ball carrier back inside allowing cut back defenders to make the big play.”

Eight new zone coverages were added with the promise of defenders having more awareness of wide receiver patterns when they cross into the zones.

Special teams have received a couple of touches as well. The kick meter has received another update, kickers can be iced on field goal attempts, and new trick plays have been added.

Madden NFL 17 is set to release on August 23 for the PlayStation 4 and Xbox One. EA Access subscribers on the Xbox One will get have a limited time trial available prior to release.