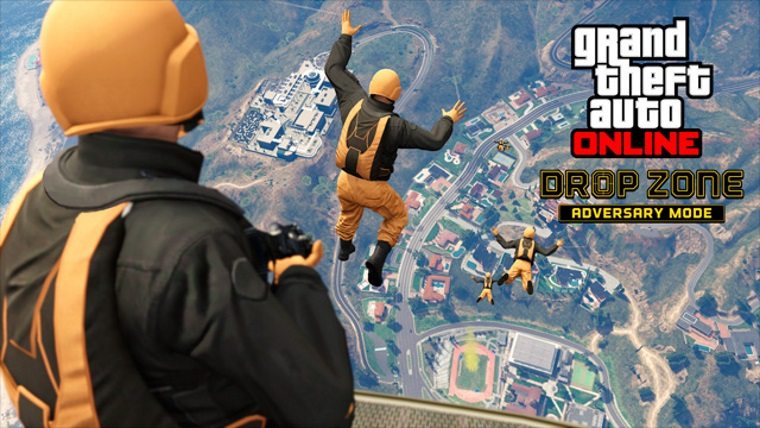 Rockstar is prepping a new GTA Online Update which should hit PS4, Xbox One, and PC later today. The patch will add in a new gamemode along with a couple of cars and vehicle upgrades. The new cars can actually take advantage of these updates too, as they’ll be available to modify via the usual shop.

Drop Zone is the new gamemode, offering a nice new twist on the parachute gameplay that has been in GTA Online from the beginning. The big change is that this is an Adversary mode, meaning players will fight for dominance, as they drift to the ground.

“In this new Adversary Mode, teams of paratroopers jump from Cargobobs hovering high above, then race to the ground to seize and maintain control of a small, exposed patch of terra firma. No man is an island here – you and your squad mates will need to attack and defend as a unit.

“With four teams and up to 16 players zeroed in on the target area, this mode is fast, chaotic and prone to huge swings in fortune. First team to hold the drop zone for a total of two non-continuous minutes wins. There are five Drop Zone maps, each requiring a unique approach to deal with changes in terrain and cover. These can be found at Pillbox Hill, Richman College, Elysian Island, the Mirror Park cul-de-sac and the Sisyphus Theater.”

The two new cars are the Karin Sultan and Bravado Banshee, which will be available from Benny’s Original Motorworks. Both of these cars can be modified at Benny’s, with a fully upgraded model apparently being competitive with the supercars, such as the T20 and Zentorno.

Rockstar also announced that there would be special events this weekend, offering double GTA$ and RP in various playlists, so check back for updates on that.