Hands on with Battlefield 3 on PlayStation 3

Still worried about Battlefield 3 on consoles? We're not. 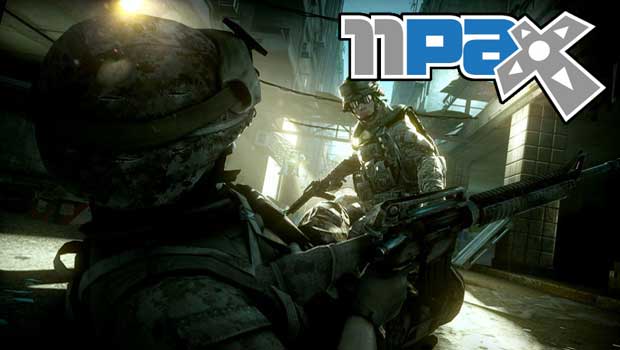 This weekend we were invited to PAX Prime by Electronic Arts to check out Battlefield 3, and to attend the game’s first community event.  Alongside a handful of other independent online publications, we were propositioned to head to Seattle (on EA’s dime) and see how the game is coming along.  We got a hands-on look at the PlayStation 3 version of the game in co-op mode, as well as the Rush and Team Deathmatch modes on PC.

It wasn’t very long ago that the dedicated PlayStation fanbase erupted in controversy over the showing of the PS3 version of the game. When DICE revealed it to the world on Jimmy Fallon’s late night show, some gamers took issue and questioned the integrity of the game on console.   So when I found out that I would be playing the PS3 version of the game, I knew I would have enough information to finally reaffirm my pre-order of  Battlefield 3 on PC.  Unfortunately this didn’t happen.  In fact, the exact opposite of what I expected turned out to be the case.  Not only did it completely change my view on exactly where I would be playing Battlefield 3 this fall, it had me weighing options of possibly purchasing multiple versions.

Of course, there will be significant visual trade-offs between the two versions of the game,  but what really caught my attention was the gameplay on the PS3. One of the major reasons I wrote off the PlayStation version in the first place, is that the PlayStation control scheme is well known to be the least friendly of alternatives when it comes to first person shooters.  Having been beat over the head with this deficiency over the years, I had just assumed that this would again be the case with Battlefield 3.  I certainly didn’t expect to find what I did, which was a fluid experience that left you transitioning from the very well done new melee attacks, to gunplay, with the added vaulting mechanic, that all felt as natural, if not better than its PC counterpart.  I’ve played a considerable amount of Battlefield 3 on PC.  Following the alpha, I knew these new controls felt great on the computer, but I wasn’t convinced that they would make the jump and deliver that visceral experience to the PS3, boy was I wrong.

Since campaign style gameplay is going to be new for some veteran Battlefield players, it was also nice to see how well done the enemy AI was in the game. Utilizing cover and communicating with your squad-mate was essential for success in the mode. Enemies utilized tactical vantage points in ways that made it necessary for your teammate to lay down suppressive fire to advance, and trying to blast your way through was a ticket to quick restart of the mission. Just as the multiplayer has done in the Bad Company franchise, this cover, while integral to your survival, slowly peeled away as enemies rained down bullets on your position. From the tight corridors of the enemy occupied buildings, to the open streets with multiple tiers of verticality, the game required a level of teamplay that co-op fans will have a hard time finding fault with.  My co-op partner, Cricket Lee of Girl Gamer, was in complete agreeance that the PS3 version was indeed fantastic.  If anything we were both moaning about its difficulty, if we had to point the finger at one specific fault.

I didn’t get a chance to play any of the other modes of the game on console at the event, but if they all hold the level of quality that the co-op did, it’s quite possible that Battlefield 3 will go down as the best first person shooter on the PS3 this generation. The campaign style cooperative play was revealed at Gamescom, and if you haven’t had a chance to watch it, you can do so here. Though it definitely pales in comparison to the genuine artifact.

Its also worth noting that the accentuated swearing by the soldiers wasn’t present in the build we played, so its possible that this is still being decided on. The PlayStation 3 experience was just a small sliver of what EA and DICE had us playing at the event, as I also got to go head to head with other members of the press in the game’s Rush and Team Deathmatch modes on PC, which I’ll be writing up shortly.

Home / Game News / Hands on with Battlefield 3 on PlayStation 3