135 New Hearthstone Cards should change up the game significantly with The Witchwood Expansion. 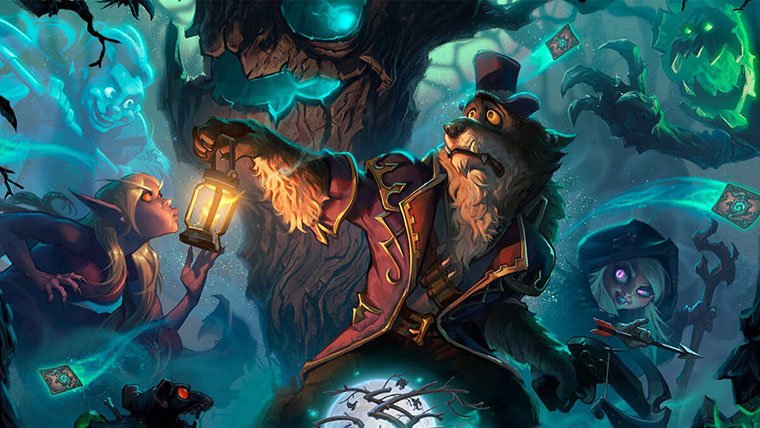 Hearthstone fans have been anxiously waiting for any and all details about the upcoming expansion: The Witchwood. Following a very interesting reveal video there wasn’t too much to go on, but Blizzard just blew the doors open on all things Hearthstone: The Witchwood via a new stream. We also got to check out some of the new cards and features at PAX East 2018, so check back for our interview with Blizzard’s Ben Brode very soon. You’ll want to know everything about it since Hearthstone: The Witchwood now has an official release date of April 12th.

But before that, just what will players get with Hearthstone’s new expansion? 135 brand new cards will be added to the game, all themed after the titular haunted forest. These new cards bring with them some new gameplay mechanics and abilities. For example, the new keyword ability of Echo which creates a copy of that card in the player’s hand once they play it. This can be chained in various ways, as Ben described to us at PAX East.

There’s also new minions that require certain things from the player, but offer gloriously powerful abilities in return. If you can find a way to craft an entire deck of either even or odd cards you’ll be able to use one of these new creatures to some pretty devastating effects, such as your starting Hero Power only costing one mana or upgrading it right from the start of the game.

As shown in the original Witchwood reveal trailer, some characters will also be able to transform between human and worgen versions of themselves. “Each turn a worgen card is in a player’s hand, its Attack and Health are swapped, creating opportunities to play the card at just the right time,” explained Blizzard. Then there’s the Rush ability, allowing newly played cards to attack immediately, but only other minions and not the enemy hero.

There’s also new single player content styled after the well received previous expansion release. Players who want to go through and enjoy some time away from the competitiveness of multiplayer can dive right into this when The Witchwood hits Hearthstone later this week. For more on Hearthstone, check back for our full interview soon.