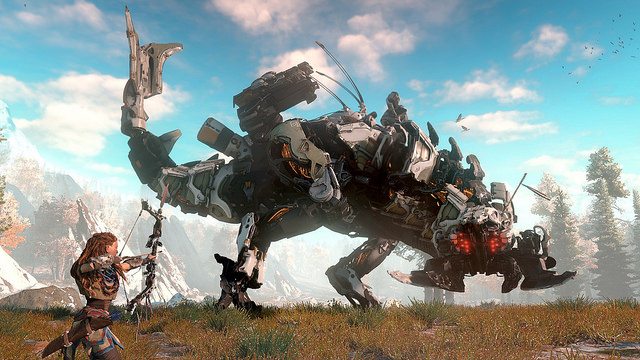 PS4 exclusive, Horizon Zero Dawn, will have a unique healing system that is unlike in most other games.

He said “you have to heal yourself” in Horizon Zero Dawn. It won’t have regenerative health like in other games. A fan asked if you regain health with things like medical packs. Jonge said you heal “with things from nature” instead.

It sounds interesting that you have to regain health manually in Horizon Zero Dawn with things from nature. It’s likely you may have to hunt for food or something to regain health if I’m interpreting Jonge’s answer correctly.

Speaking of hunting, Jonge also said via Twitter that there will be different hunting types in Horizon Zero Dawn. Although he’s not willing to share more about this until a later date.

Horizon Zero Dawn is the new game from Guerilla Games and it wowed a lot of people at E3 2015. It’s great to see the developer trying something new as it would have been kind of boring seeing another Killzone game.

Hopefully more from Horizon Zero Dawn will be shared with us later this year. Sadly, the game itself will not be released until 2016.