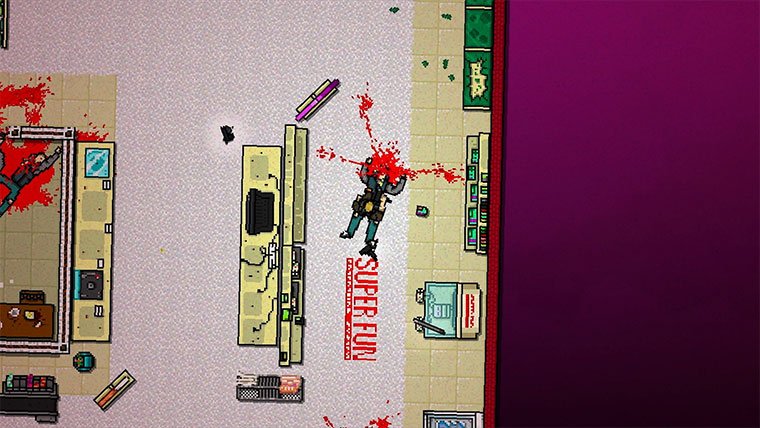 Hotline Miami 2: Wrong Number has a tough act to follow.  The original 2012 release garnered critical acclaim for its blending of extreme violence, compelling top-down score-attack gameplay, stylish presentation and strange twisting story.  The game literally came out of nowhere to surprise, shock, and delight. Hotline Miami 2 doesn’t have this same element of surprise working for it.  It does however offer about what you should expect from a decent follow-up.  In Wrong Number, Dennaton Games builds on and refines their hyper-violent combat, fleshes out their story, and delivers a game that has more substance than its predecessor, with equal parts style.  Unfortunately, it’s where they spread their wings and try new things that don’t always hit the same high notes as the original.

That said, Hotline Miami 2 is largely the same game as the original on the most basic of levels.  Players are tasked with killing all enemies in each stage, how they do that is up to them.  Hotline Miami is part memorization, part timing, and part reactionary gameplay. Players will need to remember and visually recognize which enemies have melee attacks, which have guns, what are their patrol routes, and figure out what is the optimal path through each level. The penalty for slipping up is always an instant, brutal death.  There’s a lot going on in Hardline Miami’s core gameplay.  Managing ammunition and weapons, for one.  Making sure you know the layout of each level is also very important.  Are there windows that you can be seen through.  Are there dogs patrolling? New for this game is more usable cover.  With certain death looming around every corner, Hotline Miami 2 gameplay is incredibly tense and violent.

Wrong Number meets the high bar for blood and gore that the original set.  For a game that relies on retro graphics, Wrong Number conveys blood, gore and violence with shocking clarity.   It’s a gore fest.  Dismembering enemies with chainsaws or bashing their heads in with a lead pipe, there’s just no shortage of hyper-violence on display. There hasn’t been any significant overhaul to the presentation in Hotline Miami 2 or in the gameplay.  What has changed is the structure with which the levels are designed, and there’s more constraint placed on the player to use some of the game’s new features.  Multiple new characters with different and unique skill sets are forced onto the player very early on. The new characters are indeed quite different for the series, and from one another.  One character has dual machine guns, one packs killer punches, another can roll and dodge.  Instead of earning masks as in the previous game, and tinkering with the associated perks you thought were best, Dennaton decides for you this time around.  It’s a different design choice from the original, making you change the way you play significantly from level to level.  While many levels do force you into specific roles, there are some that don’t, and some that allow you to play multiple characters.

Hotline Miami 2 is a difficult game.  One that relies on reflexes of the player, memorization, and the willingness to respawn and try it again.  While certainly not a stealth game, Wrong Number has players memorizing enemy paths and locations making the game feel more like a puzzle than a score attack bloodbath.  But once you do put together the pieces for each level in Hotline Miami 2, you can shoot for better scores and take on more challenging difficulty levels.  And that’s all part of the appeal to the Hotline Miami games.  A pumping soundtrack fuels this desire to score better, and kill more.  Refinements made to the gameplay include an enhanced targeting system, which can come in handy when trying to track an enemy around a corner, or when out of sight.  Enemies will have more opportunity to get out of your viewing range as levels are not nearly as tight as they were in the original.  A look feature from the first game returns, allowing you to survey and possibly lock-on to targets that you can’t immediately see.  Since maps are more sprawling, coming to grips with these mechanics and how they can help you progress is very important to removing some of the frustration and trial and error frequently found in the game.  If you do decide to tackle the game’s hard mode, lock on will be disabled. 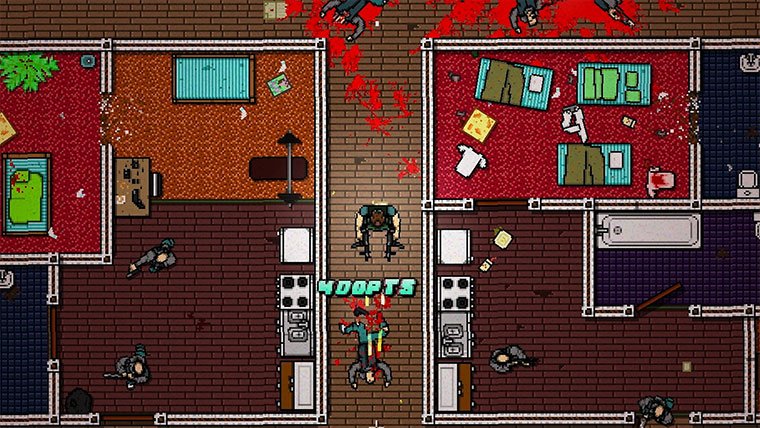 While the original Hotline Miami was a very cryptic, well paced story that kept you tuned in.  Hotline Miami 2 goes all over the place.  This sequel is effectively a continuation of the first game that expands on that storyline, but it does so by branching out in many story chutes.  Like the original, time jumps back and forth.  Though this time it jumps between decades, and not hours.  The story dives into flashbacks, movie scenes, and other settings that make it harder to piece together and follow along.  Where the original had a do more with less quality, Wrong Number might have too much minutiae in the plot for its own good.  Though this story expansion does give the game a reason to try new things and put players into different gameplay scenarios that would otherwise make no sense.

The first Hotline Miami game was far from perfect. Glitches in the AI were prevalent, and frustrating.  This has not been remedied in the sequel, and in many cases feels much, much worse.  Enemies frequently get hung up in doorways.  Invincible for a short time, they can and will still shoot/stab/hit you.  When the game glitches like this, it can be incredibly frustrating.  It can seemingly happen at any time, not discriminating on whether you are just getting started or about to finish a level.  Enemies can frequently be found spinning around in circles as well, and they’re difficult to approach as you just don’t if they’re going to attack.  Hotline Miami 2 is not without its problems, and while these issues could get patched, it’s not a complete deal breaker for the game.  Though it will be noticeable.

Hotline Miami 2: Wrong Number lives up to original in a number of ways, even outpacing it in terms of stylistic violence. There was something very pure about the original that made it a ton of fun, that Wrong Number doesn’t have.  Maybe it was the mystery, or perhaps it was the booming soundtrack that beckoned for one more turn that made the original so delightful. Despite efforts to recreate that, Wrong Number falls a little short. With a story that’s all over the map, and constraints often placed on the player, Hotline Miami 2 takes away some of the fun from the original game — just not all of it.