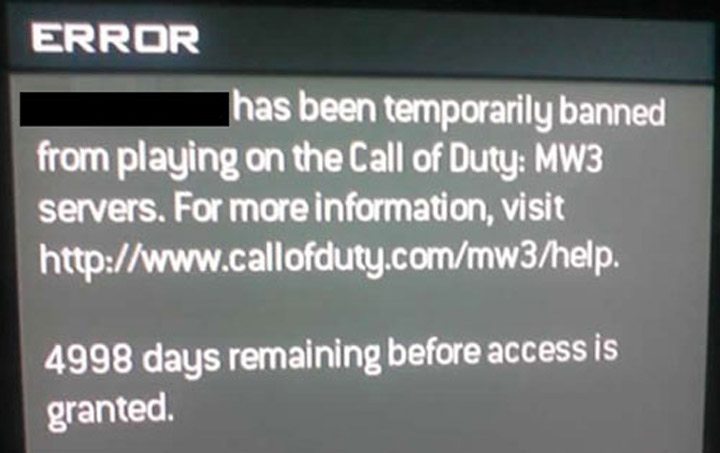 Infinity Ward is issuing what is effectively a permanent ban to offending player on Call of Duty: Modern Warfare 3.   By banning players for 5000 days the Call of Duty enforcement team is trying to keep bad players in check.  Infinity Ward’s Robert Bowling said in a recent Tweet:

http://t.co/fqO0tmpv #MW3 Player Banned for 5000 days?! Yes. If you see this message, it means you've been Permabanned (for something bad)

The error message will tell you that you have been “temporarily” banned from playing on the Call of Duty: Modern Warfare 3 servers, yet when it tells you how many days you have left in your ban it hits you with the rather large number of days to wait.

Think about it before you try hacking your way to victory, when all of your friends are playing Modern Warfare 17, you’ll get your access back to the Infinity Ward servers. Forum users have said they have circumvented the bans by changing to a different profile on the same Xbox 360.