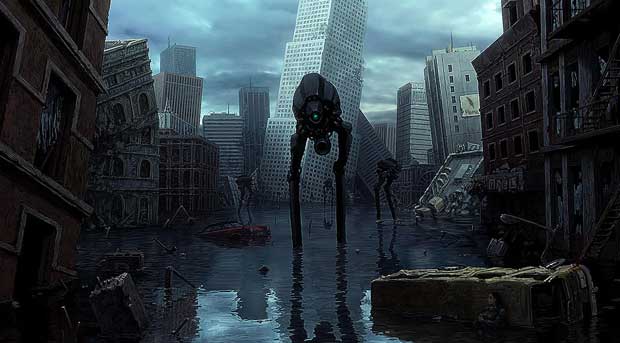 The Half Life 3 rumor mill seems to be on fire this week, or at least it is to those of us who are already on winter break and have nothing better to do *cough, cough*. Three particular stories have been circling the inter webs in the past several days including a special HL3 t-shirt, a suspicious screenshot, and of course an announcement of the ever awaited title.

First off, let’s dissect this interesting screenshot of Half Life 3‘s possible Steam achievements. The image above surfaced in an article on Stickskills and while it looks interesting, there are some inconsistencies with its structure. First of all, the background for every thumbnail is the same picture of what appears to be a sort of ocean scene. This is very uncharacteristic of Valve, who tend to uses a solid background for their achievement pictures. Second, the picture of the creature on the “Niflheim” achievement reminds me an awful lot of the Gargantua from the original Half Life, however that could just be coincidence since it’s a pretty crude image with hardly any defining features. Thirdly, the percentages seem very strange. The first achievement, “The Eagle Has Landed,” appears to be an achievement that is unlocked from completing the first obstacle in the game which should read 100% complete if the player has played enough to start progressing through the other achievements. Also, the “Niflheim” achievement is almost 60% complete to kill ONE enemy…..unless Valve is counting just how much damage you’re dealing to the enemy (unlikely), these achievements seem to be pretty fake looking. However, this is all mere speculation.

The picture of this interesting Half Life 3 shirt IS considerably more likely to be true.

Valve’s offices are within twenty minutes of where this event takes place so it isn’t hard to believe that a Valve employee would be there. If this really is a true Valve employee donning a HL3 t-shirt, great. But, so what? I could go out and make a Half Life 27.83 t-shirt with a picture of a headcrab flying an X-wing and making out with Frodo; it doesn’t mean a game is being made of it. Odds are, this is just Valve trolling again, fanning the flames of their most anticipated project.

Regardless, this has gotten people wondering if Valve is finally going to announce the next Freeman adventure (whether it’s Episode 3 or a full sequel…..probably the latter at this point) at the VGAs this Saturday. Since Bethesda’s Skyrim was a surprise announcement at last year’s VGA ceremony, a Half Life 3 unveiling would certainly fill the void of big surprise announcements for this year’s event. Then again, if Valve announced Half Life 3 right now, wouldn’t it kind of undermine their other two games currently in development: DOTA2 and Counter-Strike: Global Offensive? Although those games would probably still do fine if Valve talked more about those titles than they did about HL3. Or, better yet, what if they released all three games at the same time, as a kind of successor to the Orange Box?! I know, I’m reaching…..but it would be amazing wouldn’t it? It has been four years since the last run in with the Combine and since the game wouldn’t come out until next year at the earliest (probably) it isn’t hard to believe that the game is ready enough to be released along side two other greatly interesting, but less-awaited for games to help boost their sales.

Chances are, this is all just smoke and mirrors and we will have to wait a little longer for any word from the silent Dr. Freeman. It’s important to have dreams though, very important.