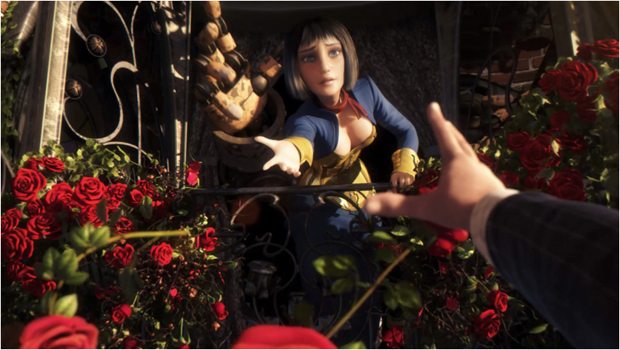 You don’t need any more incentive to get yourself hyped for BioShock Infinite. From everything we’ve seen so far, this title will be one of the best looking games of the year. Hell, it’ll probably be one of the best looking games ever. I know it’s hard to believe, but Irrational is hoping to deliver more than just an engine capable of producing stunning environments. They want to give gamers a story that is just as good and captivating as the first. Ken Levine recently sat down with Playstation Blog to discuss the game and how he hopes to create an emotional relationship between players and Elizabeth.

“With this game we got behind this idea of building this relationship between Booker and Elizabeth. We’re really focused on a relationship that is earned, a relationship that is believable. Our focus is, what forms a bond between two people? Making sacrifices for each other — that will build a relationship very quickly. Not just, “these two people are drawn together because they’re attractive.” The same way that in BioShock, I didn’t want Atlas to betray the character so much as the gamer. When Andrew Ryan tells you that you’ve been manipulated the whole time, you think, “Screw you, man!” In the same way, I want the player to build this relationship with Elizabeth in BioShock Infinite. That’s the challenge of what we’re doing.”

Levine also briefly talked about the origins of “Songbird”, a biomechanical bird-monster that has locked Elizabeth in the depths of Columbia since she was born. Songbird will be a part of a love triangle between itself, Booker (the player’s character) and Elizabeth, with elements of both light and darkness similar to the triangle between the Big Daddies, Little Sisters, and Jack featured in the first game. Levine, speaking about Songbird, stated, “We wanted a character that represented the sky in the same way that Big Daddy represented the ocean…We wanted to make him feel like he belonged in the sky, like he owned Columbia, but he’s also part of Columbia.”

The PS Vita was also a topic of discussion, and Levine was certainly not subtle in expressing his excitement for Sony’s new portable system. Levine praised the Vita’s dual analog sticks which he says will allow for a “real shooter” to be played on a handheld for the first time. Irrational is said to be currently developing an untitled BioShock game for the Vita, so it’ll be interesting to see if Levine can turn his enthusiasm for the system into an FPS with a smooth control scheme, something portable games of the genre traditionally lack. Levine had this to say when asked about the Vita:

“I’m a gamer, right? I like playing games on iPad… but deep down I want that level of control. What’s cool about PS Vita is that it seems to have all the benefits of an iPad-type device with the touchscreen and motion controls. But it has dual analog sticks….and I love shooters. You can finally play a shooter, a real shooter, on a handheld. Seriously, that’s a hole in my soul right now. Now I’ll have something I can play real shooters on, and that’s really important to me. It’s awesome. I Tweeted a while ago that it did everything but make me an omelet. It sort of has everything and the kitchen sink in it, which is great as a gamer.”