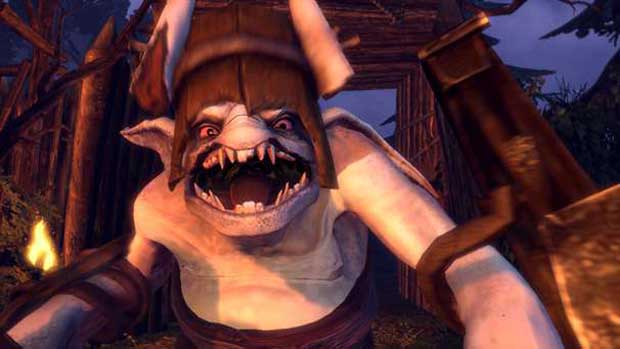 Peter Molyneux has been a proponent of the Kinect motion controller since it was just a concept.  Though his development studio has not released a game that makes use of the device, the developer has still been vocally supportive of the hardware.  Though recently, Molyneux and Lionhead have been tasked with making a Fable game that utilizes the controller but is targeted at the core audience of the Xbox 360.

While Molyneux showed off Fable: The Journey at this year’s E3 to some criticisms that the game was “on rails”, the developer went to great lengths get the word out that it wasn’t.  Whether Fable: The Journey is or isn’t on rails, won’t likely be seen until the game releases in 2012, Molyneux was heard addressing the challenges of working with the controller at E3 2011.

The developer noted the problems with developing for the controller in a recent interview.

“I’ll admit that Kinect has got some problems. As an input device it has some real problems. Without a thumb stick, navigation is a real problem,” Molyneux said.  “You haven’t got any buttons, so ordering the player to do something can be somewhat of a problem.” and pertaining to Fable: The Journey   “It started about seven months ago when Microsoft came to us and said, ‘Look we want you to do a [Kinect] experience for the core gamers’,” said Molyneux.

“So we sat down and thought through the problems with that, and the first thing was figuring out how we can make Kinect more engaging, more engrossing, and more emotional than any control-based game or any Fable game has ever been before.”

Kinect has had a hard time breaking into the core gamer’s psyche, likely because noone has developed anything that has done the things that Molyneux is trying to do.  As it stands, Kinect’s most promising aspects are as a supplemental controller to core experiences.  As we saw at E3 2011, major releases like Forza 4, Mass Effect 3, and Ghost Recon: Future Soldier all look like they have interesting features that will enhance the core gamer’s experience, without forcing them to drastically change the way they experience the game if they don’t use it.