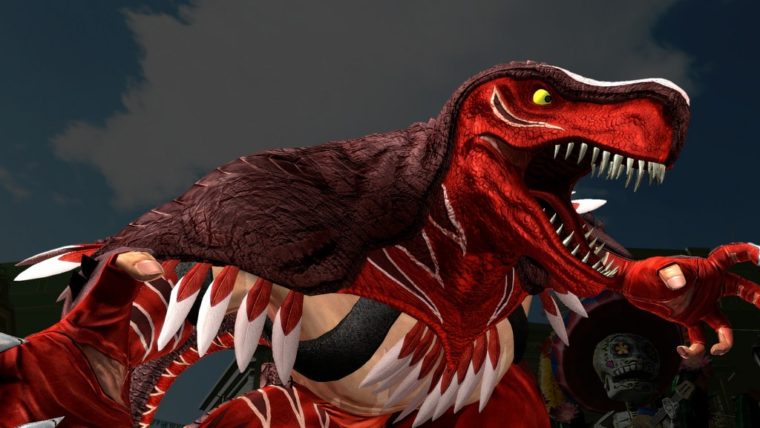 The King of Fighters series might not be as huge and popular as Street Fighter, but it has continued to put out quality fighting games since the original game hit the Neo Geo all the way back in 1994. Now, over twenty years later, SNK is prepping another entry into the series, The King of Fighters 14. The game is set for another convention appearance at the PlayStation booth in C3 Show, Hong Kong, but before that the team wanted to reveal some new fighters being added to the game.

Four new fighters are joining the massive roster, which is said to top out around 50 characters. Many of these will be returning from previous games, with some of the most popular making a comeback. However, they are also adding in brand new characters, which will make their first appearance in King of Fighters 14. One of these was among the four announced today.

King of Dinosaurs is a brand new character for the series. Described as “an evil and mysterious “heel” (a.k.a. a “rudo” in lucha libre) wrestler who wears a tyrannosaurus mask appears! Is he about to devour all the veteran fighters? Human or beast? Who hides behind the mask?!” Along with him KOF 14 will see the return of Maxima, Clark, and Terry from previous games.

Two new stages were also shown off, called Guanajuato Dynamite Ring and Derelict Church. Guanajuato Dynamite Ring is “a special ring set in the townscape of a historical Mexican city. Its design has been inspired by the beautiful and festive city of Guanajuato.” Derelict Church’s description reads “The morning mist and sunbeams glaring through the church’s windows complement this stage, which has been inspired by the atmosphere of K’ and his allies.”

The King of Fighters 14 will hit later this year exclusively on PS4.