The latest news in the world of video games at Attack of the Fanboy
January 4th, 2016 by Scott Grill 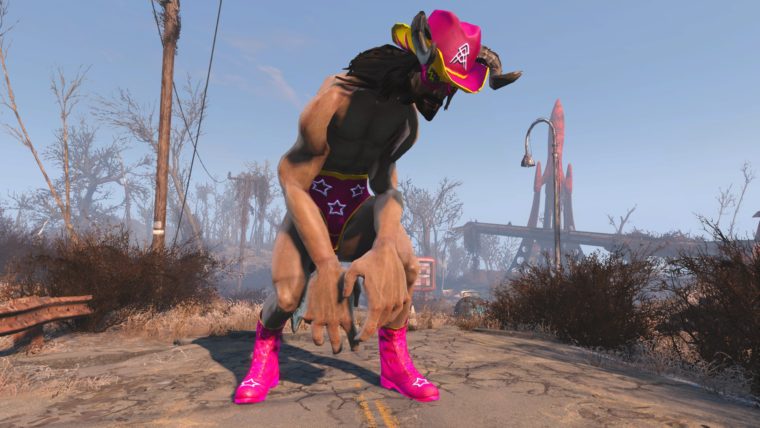 A Macho Man Randy Savage mod has sorely been missing for Fallout 4 since the game was released to the PC this past November. The popular mod from The Elder Scrolls V: Skyrim finally makes its long-awaited appearance in Bethesda Softworks’ latest effort.

The Macho Claws mod is available to download from NexusMods. Effort by modders AronaxAE and FancyPants turns the deadly Deathclaws into the late WWE wrestler with a fondness for Slim Jims.

“When roaming through the commonwealth, I ponder many thoughts, thoughts like ‘Why do Molerats dig so much’ and ‘Why is this person stuck in a wall?’. Whilst pondering these thoughts, I always miss the lack of Randy Savage in game. Well don’t worry fellow traveller, for I have saved you, behold Randy in all his glory!” the modder explained as his motivation for the mod.

The original Skyrim Macho Man mod was released in 2013 by FancyPantz and turned the game’s dragon into Randy Savage. The release of the mod received a large amount of press and coverage in various YouTube video even though it has only been downloaded a little less than 56,000 times.

Really, all you need to know about the mod can be explained in the following video that also features the Fallout Vault Dweller as Hulk Hogan, complete with the ‘Hulkamania” britches. Now go, relive your wrestling fantasies in Fallout 4.