Life is Strange: Before the Storm Lead Writer Gives More Information in Interview

The latest news in the world of video games at Attack of the Fanboy
June 19th, 2017 by Dylan Siegler 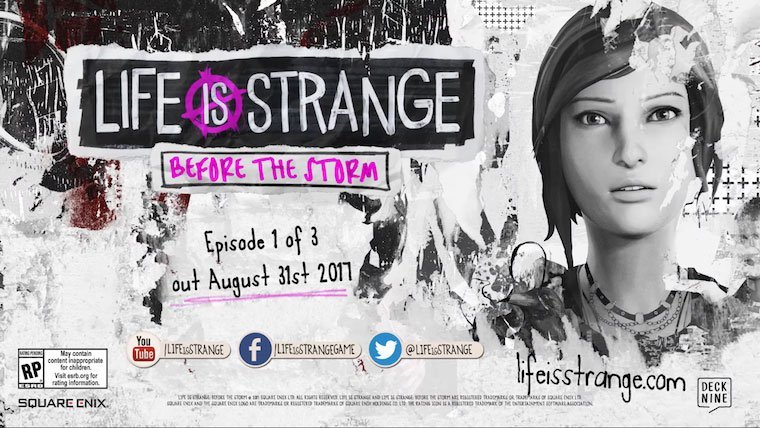 In a recent interview with EuroGamer, Zak Garriss, the lead writer of the upcoming game Life is Strange: Before the Storm, gave some insight into the development and writing processes of the game.

Garriss explained that everyone at Deck Nine, the company developing the new game, are all big fans of the original Life is Strange, so they want to do the franchise justice. He also states that the franchise and its characters are “precious” to publisher Square Enix, so Deck Nine has been in constant talks with Square Enix about how to handle each character and the world of the game. Garriss also states that Deck Nine have had full creative control of the game, “from high-level conception through full execution all the way into the production of the game.”

When asked why Deck Nine chose to tell this particular story (of Chloe in between times in her life where Max was present), Garriss had a couple of answers. For one thing, he saw it as a good opportunity to explore the nature of humanity. Chloe is a girl who goes through a lot, particularly in the time period that the game will explore, and Garriss and co. want to delve into the human side of that. Additionally, Rachel Amber is seen in the original Life is Strange as kind of a “mythic” figure; you hear about her, how pretty and popular she was, but you never get to know her and all the information you get about her is vague and sometimes unreliable. With Rachel playing a big part in Before the Storm, we’ll get to see the human side of her, the side that those who put her on a pedestal have not, and maybe don’t want to have, seen.

This vagueness about Rachel extends into Garriss’ other reason for taking on this specific story. In the first Life is Strange, Chloe doesn’t talk about this time in her life a whole lot. We know the broad strokes: Max leaves, Chloe meets Rachel, Chloe’s dad dies and her mom starts dating David. But all these things are left pretty ambiguous without much concrete detail. As fans of the original game itself, the writers at Deck Nine were curious about the specifics of this period in Chloe’s life, so, when given the opportunity to by Square Enix, they were able to write it out themselves. Before you get worried that Before the Storm will just be glorified fan-fiction, Garriss went on to say that last month he brought an early version of the first episode to Paris to let the producer, co-directors and writer of the original Life is Strange play it and they approved of it.

Garriss also explains the complications with Ashly Burch, the actress who portrayed Chloe in the first Life is Strange, but who will not be portraying her again in Before the Storm. Basically, Burch was snubbed out of the role by some executives because of a voice actor’s strike that has been going on. Upon hearing this, Garriss and the rest of Deck Nine were unhappy to the point where they even considered cancelling Before the Storm. However, they were able to work something out so that Burch would return as a story consultant, giving feedback on the game’s writing, particularly Chloe’s dialogue. So even though Burch won’t physically be playing Chloe this time around, she will still have a large part in determining Chloe’s voice and character.

Also briefly mentioned was a new mechanic that involves Chloe spray-painting various areas in the game. Garriss explained that this is basically meant to mirror how you can choose to take pictures as Max in the first Life is Strange. Since you aren’t playing as Max in Before the Storm, a new mechanic had to be created to replace picture-taking, and Garriss explains that spray-painting is more “aggressive” than picture-taking, perfectly fitting Chloe’s personality as opposed to Max’s. Like taking pictures, all spray-paining opportunities are optional.

Garriss also confirms that we will see the return of characters from the first Life is Strange, such as Frank, Victoria and other Blackwell students, seeing as Chloe will be a Blackwell student herself in this game, since it takes place before she gets kicked out. Also, when asked if Before the Storm will be “a mystery story at its core” like its predecessor, Garriss simply responded, “Absolutely.”

Finally, the question was posed about the Farewell episode, about why it is only included in the more expensive, Deluxe Edition of the game. At this point, a Square Enix PR person stepped in to answer. Basically, since the Farewell episode will have players playing as Max again, it doesn’t really fit into Before the Storm. However, both Square Enix and Deck Nine wanted to give players the opportunity to play as Max again if they choose to. But episodes are expensive to make, so they decided to make two versions of the game: one with just the three Before the Storm episodes for those who are content with just Chloe’s story, and the Deluxe Edition for those who want to play as Max again in an episode unrelated to Before the Storm. It was not revealed where in the Life is Strange timeline the Farewell episode will take place.