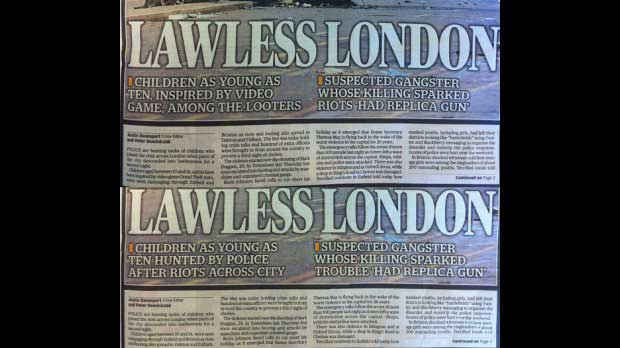 Ah, it’s journalism at it’s finest, folks. The London Evening Standard had recently published a headline that essentially blamed Grand Theft Auto for the London riots currently engulfing the city. After pressure from a number of gaming media outlets, the LES didn’t feel the need to apologize for a severely sensationalized and misguided headline, but simply changed the headline altogether in the hopes that people would forget the original. Clearly, it didn’t work.

The ongoing riots in London that are terrorizing the country over the last three days have seen widespread looting and buildings set ablaze, some even destroyed. Initially beginning in the streets of Tottenham on Saturday after a demonstration over the death of a man who was shot by police turned violent, the riots have now carried over to the surrounding burroughs causing civil unrest throughout Britain and Parliament to be recalled.

The original headline comes as a result of a quoted police officer who claimed that it was GTA that inspired teens to join in the rioting, saying, “These are bad people who did this. Kids out of control. When I was young it was all Pac-Man and board games. Now they’re playing Grand Theft Auto and want to live it for themselves.”

It all makes sense now. It wasn’t a lack of government provided jobs, a cutting of social programs, or police brutality that evoked the riots. No, it was that damn Niko Bellic and his Eastern European ideals, because we all remember that one GTA mission where you are forced to incite rioting in the streets and loot/destroy local shops and businesses. Oh wait…

Thankfully, the gaming media as well as other knowledgeable supporters of the industry correctly spoke out and were able to get a completely erroneous headline pulled. The situation is just another reminder that the gaming industry is often improperly labeled in our culture and society, and is unfortunately a convenient scapegoat for government officials and politicians who would rather blame a virtual, fictional character rather than focus on the underlying issues that are the real cause behind this kind of senseless violence.