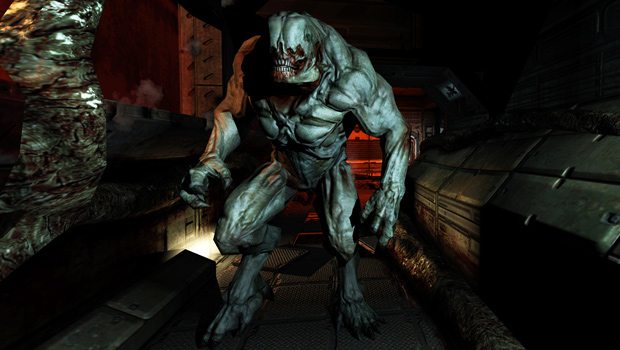 It may have been a long time since you’ve ventured into the hallowed walls of the FPS-pioneering Doom franchise, but should you choose to re-enter the world come October via the Doom 3 BFG Edition, you’ll actually be looking at some relatively new and familiar technology. id Software creative director Tim Willits told Joystiq today at QuakeCon that in order to get network support to work on the PS3 port of the Doom 3 BFG Edition, the developers decided to render the game’s graphics using the id Tech 5 engine, utilized most notably in id’s 2011 post-apocalyptic FPS, Rage.

“We never released Doom 1 and Doom 2 on the PlayStation Network,” said Willits. “So we’re like, ‘OK, what’s the easiest way to do this?’ And what the guys did instead of rewriting all the network support, [support for] friends, and all that kind of stuff, is they took Rage, took out all the ‘Rage‘ bits and put Doom 1 and 2 on top of it.”

While Rage certainly didn’t become the blockbuster title id had projected it would be, mostly due to a moderately short campaign, lackluster plot, and absence of multiplayer gunplay, it still looked damn pretty. The id Tech 5 engine was praised for its ability to render thoroughly dynamic and realistic environments aided by HDR lighting and shadowing.

In addition to some upgraded graphics and digital copies of Doom and Doom 2, the Doom 3 BFG Edition will provide longtime fans with a checkpoint saving system, 3D display support, and the Doom 3 expansion, Resurrection of Evil which included new weapons and an additional 12 levels set two years after the events of the original. The BFG Edition will also include a new single player expansion pack called The Lost Mission.

It’s possible that this move implies id is attempting to better familiarize themselves with the id Tech 5 engine and become more accustomed to working with it, as rumor has it that id plans on implementing the technology in the upcoming but yet-to-be-detailed Doom 4.