The latest news in the world of video games at Attack of the Fanboy
April 10th, 2017 by Kyle Hanson 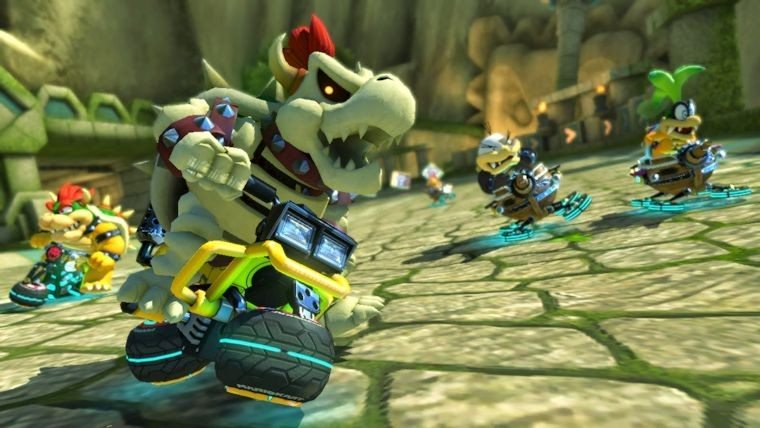 Mario Kart 8 Deluxe is billed as the “ultimate MK8 experience”, which seemed to be backed up during our time with the game at PAX East 2017. We’ve known that the game would feature the base experience, all the DLC, and some new extras including a beefed up Battle Mode, but how much would all of this impact the game’s file size? According to new info from Amazon Germany, via Nintendo Wire, it’s a pretty big jump.

Mario Kart 8 Deluxe’s file size will clock in at 6.75GB, which is an increase of almost 2GB over the initial 4.9GB file size from Wii U. With all of the added tracks, karts, characters, and modes, this certainly makes sense, and the game even seems a bit small when you look at all it has to offer. Still, with the Nintendo Switch only coming with 32GB of on-system storage, every gigabyte is important and worth paying attention to.

Players who bought The Legend of Zelda: Breath of the Wild digitally and don’t already have a micro-SD card installed will likely want to get one soon. That game, combined with Mario Kart 8 Deluxe will pretty much max out your default storage, making it so you need to buy physical games going forward. If you’re buying Switch games off the eShop then you pretty much have to have a decently sized micro-SD card at this point, as it’s only going to get tougher to manage going forward.

Mario Kart 8 Deluxe might disappoint those looking for brand new experiences on their shiny new Switch, but the game is so excellent that I think most players will be happy to have it in portable form. The Wii U game was almost worth the cost of the console alone, so if you missed it that time, then you definitely need to get it for Switch. Maybe just try to snag the cartridge if you don’t have an SD card ready for it.