The latest news in the world of video games at Attack of the Fanboy
April 18th, 2016 by Scott Grill 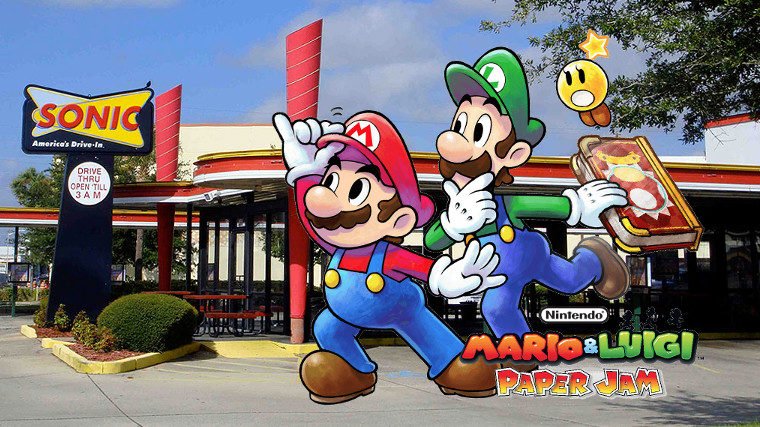 Mario and Sonic have teamed up. Only this time, it is the fast-food restaurant chain and not the Sega mascot. Nintendo announced a new promotion Monday that brings Mario & Luigi: Paper Jam toys to Wacky Pack Kids Meals at Sonic Drive-In.

The Mario & Luigi: Paper Jam promotion will run from Tuesday, April 19 through Thursday, June 30 at Sonic. It includes five different toys based on the Nintendo 3DS role-playing adventure title that combines worlds.

One toy shaped like Mario races across the room on wheels, while another featuring Paper Mario and Luigi spins around like a top. Two of the toys even resemble the folded-up paper look of the outrageous papercraft battles featured in the game.

The game was released to the Nintendo 3DS back in December for Europe and Japan and in January for North America. The game scored a 76 Metacritic review average that was praised for its combat system, but knocked for a paper thin story.

This is not the first time Mario and the gang have shown up in a fast food restaurant’s kid’s meal, of course. They’ve made appearances in McDonald’s Happy Meals a couple of times over the last decade along with Burger King, which had a series of Wii U toys.