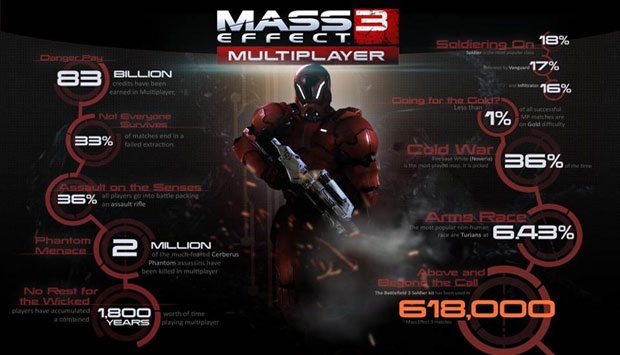 This weekend marks the first “N7 Challenge Weekend” for Mass Effect 3 players.  Galaxy at War players that play between Friday 3/16 and Monday 3/19 will have the opportunity to earn rewards to be used in Shepard’s war against the Reaper onslaught.

Here’s what you’ll earn and the rules for participating in “Operation Goliath”:

Any player who is part of a squad that beats the Reaper faction on Silver difficulty or better will unlock one Commendation Pack. This means that at least one member of the squad must be extracted at the end of the mission – this will earn all squad members the reward. Each player can earn a maximum of one pack and each pack contains a random N7 Arsenal Weapon. Originally only available as single-player weapons via the N7 Collector’s Edition, these multiplayer variants will be exceptionally rare and are NOT obtainable through regular purchasable Reinforcement Packs. The Commendation Packs will contain one of the following guns at random: (1) N7 Crusader Shotgun, (2) N7 Eagle Pistol, (3) N7 Hurricane SMG and (4) N7 Valiant Sniper Rifle.

Destroy as many brutes as possible – if the multiplayer community kills a combined 1 MILLION brutes within the hours of the challenge, ALL players will receive a Victory Pack as a reward.

Rewards will unlock on Tuesday after the promotion concludes.  From then you’ll have seven days to open your packs after recieving them.  Note that if you don’t use the packs by then, they will expire and cannot be redeemed.  To participate, players must enable the data tracking option in the game or your challenges and accomplishments will not be tracked.