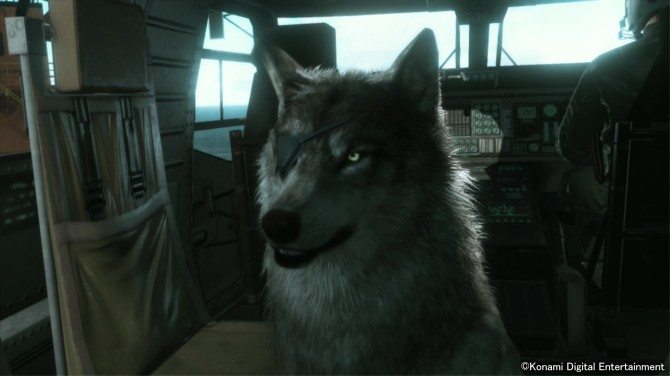 Konami has shared even more footage from Metal Gear Solid V: The Phantom Pain dduring TGS. Everyone has been buzzing lately that Big Boss has his own wolf friend in the game.

During the demo playthrough of Metal Gear Solid V: The Phantom Pain, Big Boss can be joined by a wolf during missions by the name of DD. Big Boss already has an A.I. partner with Quiet helping you out as a sniper in some missions too.

In the Metal Gear Solid V: The Phantom Pain footage, Big Boss finds DD the wolf in the African jungle as a puppy. Sadly his mother is dead so DD confides with Big Boss instead. Hideo Kojima said encountering DD is optional so some players might not even see DD during their time with the game. If you like animals, you’d be interested to try and find him.

When Big Boss takes DD with him, Ocelot trains him and he grows up to be a huge wolf. Much like Big Boss, DD wears and eye patch too. When he’s grown up, Big Boss can take DD to come missions and help him out. I forgot to mention that DD meant “Diamond Dog”.