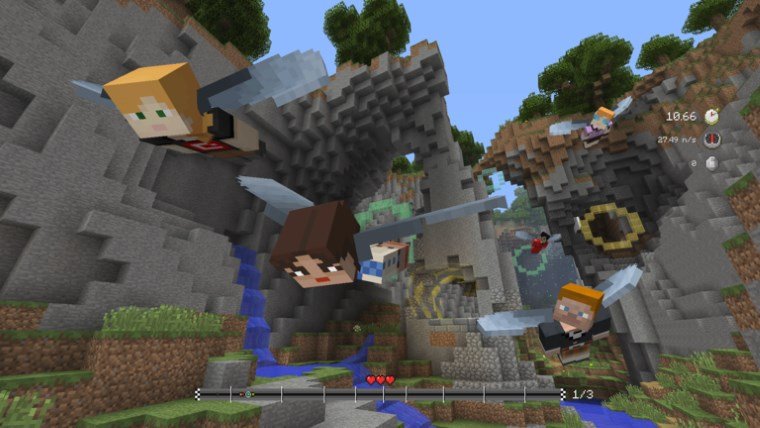 Mojang and 4J Studios have announced another new Minecraft mini-game heading to consoles tomorrow. Glide will have players flying through Minecraft levels, using the elytra glider wings featured in the regular game. This new mini-game will be completely free for console players, though more tracks will be paid DLC later on.

The new update will hit tomorrow, March 28th, bringing with it the first in “a series of free tracks to be released.” There will also be a bunch of different ways to play through the maps, with different game modes and objectives to tackle by yourself or with other players.

“Beat the clock in the Time Attack mode, using thermal drafts and speed boosters to your advantage, or go for points in Score Attack by hitting all the hoops. Careful study may reveal sneaky shortcuts to refine your runs, so keep your eyes peeled! You can choose to beat your personal best in solo play, pit your wing-skills against other players online, or – on Xbox One and PS4 – take a swing at the all new Glide leaderboards. This update also boosts the number of PS4 and Xbox One players possible in both Glide and Battle up to 16, and all platforms get a more spacious lobby, too!”

4J’s art director David Keningale talked about the new mode, saying “Glide has pretty much taken over the Mojang office – if you’re anything like us, you’ll be quickly fixated on taking down your friends scores, eking out every precious second from the course. Look out for more tracks in the near future – some free, some as part of a Season Pass. You can get a glimpse of these at the end of the trailer.”

The Minecraft Glide update hits PS4, Xbox One, Wii U, and other consoles tomorrow, March 28th.