The latest news in the world of video games at Attack of the Fanboy
May 27th, 2012 by William Schwartz 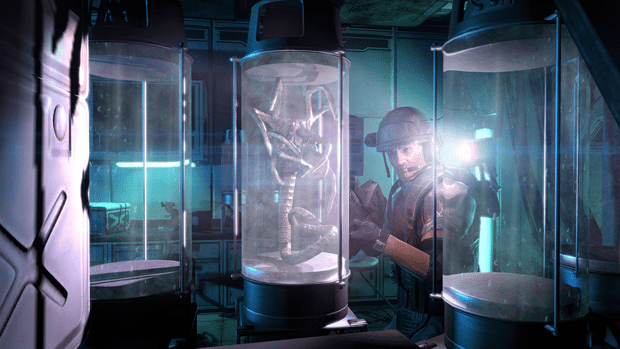 Aliens: Colonial Marines is one shooter heading to the Wii U that has fans looking forward to the console’s third party support at launch. The first-person story extension into the world based on the movie franchise, is coming next year from Gearbox Software.  In a recent interview, Brian Burleson of Gearbox Software gives fans a hint at what to expect with the next generation hardware.

“The Wii U is a powerful, powerful machine and it can do a lot of cool new things.  And so the game istelf, moving it over to work on the Wii U was not much of a chore.”  Now the interesting thing is finding out all the cool ways you can use the controller to do new stuff with it. You can imagine all the cool things we can do, with this franchise and having a thing with you, right?”

“The Wii U is a powerful, powerful machine that can do a lot of cool new things.”

Just how powerful is the machine?  Burleson couldn’t say in the interview because of an NDA in place between Gearbox and Nintendo that prohibits him from doing so.   Though the official specs have not been released as of yet, Burleson did say that Aliens: Colonial Marines would be “better” than its PlayStation 3 and Xbox 360 counterparts because of “more modern tech”, according to an interview with Eurogamer.  How much better it will exactly be, and what will make that version the better option, Burleson says “Just trust me on that one”.

Nintendo’s Wii U is scheduled for an undetermined date later this year.  With E3 2012 just days away, we won’t be waiting much longer to hear and see a more complete picture of the upcoming console.  Follow us during June 4th – 7th for our hands on impressions from show floor of E3 on Nintendo’s latest console, and enter to win one in the process.

Aliens: Colonial Marines begins with an ostensibly abandoned ship, the U.S.S. Sulaco, recovered in orbit around LV-426. Players lead a group of highly trained United States Colonial Marines as they board the deserted craft to uncover the fate of the crew. They will have to fight to survive unspeakable horrors and their own anxieties as they chase down the truth behind a galaxy-spanning deception that places humanity at the mercy of the most murderous and deadly species in the universe.