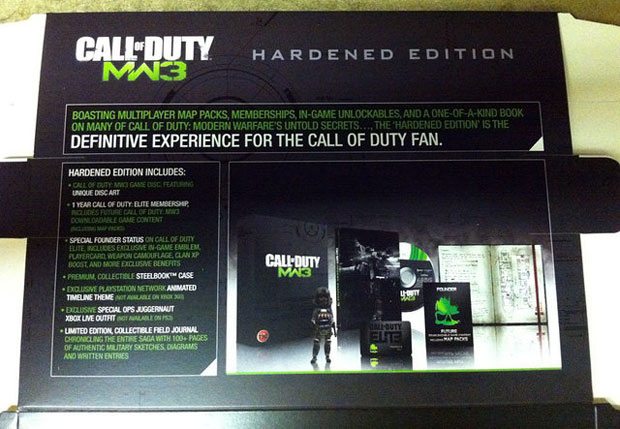 A leaked photo of Modern Warfare 3’s “Hardened Edition” hit the internet earlier today, and with it revealed all of the features that will be coming with the “Definitive Experience for the Call of Duty Fan.”  According to a source who uploaded the goods to Wired.com, the hardened edition will come with quite a few perks.  An exclusive Juggernaut outfit for your Xbox Avatar, Limited Edition artwork, a year’s worth of Call of Duty: Elite membership *with “Founders Status”, a collectible steelbook case, and a ton of other Call of Duty collectibles.

Activision will be handing out vouchers this weekend for the “Hardened Edition” to all who attend the Call of Duty: XP fan event being held in Los Angeles. Also at the show, scheduled to reveal are the first glimpses of the shrouded in mystery Call of Duty: Modern Warfare 3 multiplayer, and a special guest appearance by Kanye West.

With all of those cool features in the premium edition of Modern Warfare 3, we’re guessing that there’s no way this is coming in under $100.  The year of Elite could be worth as much as 60 bucks, unless Activision is planning on taking a haircut on their DLC offerings, which I don’t think is the case.