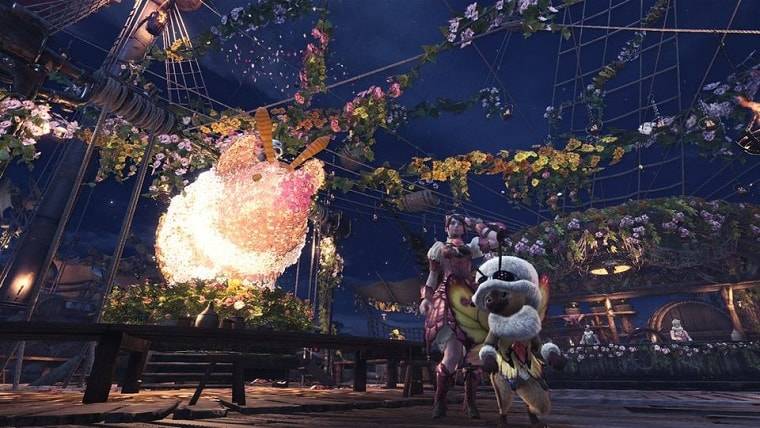 Monster Hunter: World might be a game about going head-to-head with gigantic creatures, but with the coming of the Spring Blossom Festival in April, players will be able to take a break from all that and spend some time smelling the roses.

Well, flowers in this case.

The Spring Blossom Festival will be Monster Hunter: World’s first seasonal event and it will feature a variety of changes and new features during its two-week duration from April 5 to April 18.

First, as suggested earlier, the festival will prompt all of Astera to get a complete makeover, covering the entirety of the hub with flowers. In addition, there will be fireworks, the townspeople will dress up in seasonal attire and a Poogie flower display in the middle of the town.

Meanwhile, on the gameplay side of things, players will be able to look forward to the return of various time-limited quests. Unfortunately, the specifics on this vague; and considering that Capcom mentioned that “some exceptions apply,” it’s more likely we’ll be seeing quests like “Wiggle Me This” (the Wiggler Head quest), rather than third-party collaborations like “The Proving” (Horizon: Zero Dawn costume and weapon).

Furthermore, two Lucky Vouchers, instead of just one, will be handed out daily during the event’s duration, making hunts for specific monster gems or fodder deco (assuming Triple Threat Throwdown returns), all the more efficient.

There is likely to be a patch beforehand, so ensure Monster Hunter: World is updated to the latest version to make sure you can take part.

In related news, Capcom has announced the first major update for MH:W is due out on March 22. It will be mainlined by the Deviljho and will feature an assortment of QoL updates (such as the option to return to the gathering hall once a quest has finished) and other smaller gameplay additions (such as a new community-created Greatsword).