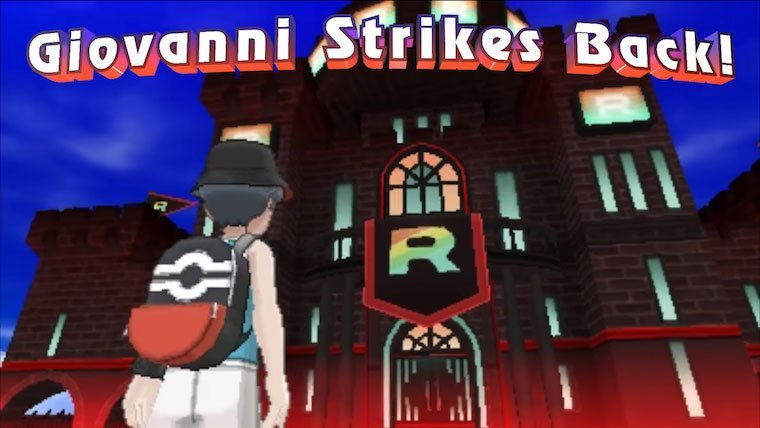 The new, upcoming Pokémon games, Pokémon Ultra Sun and Ultra Moon, come out in just over two weeks and today (November 2) we got another trailer that gives a ton of new information. The new trailer confirms the inclusion of several more villainous teams from throughout the ages, as well as a ridiculous amount of Legendary Pokémon.

The new trailer starts off by introducing Team Rainbow Rocket. The lore behind this new team’s creation isn’t clear, but it is confirmed from the first moments in this trailer that former Team Rocket head Giovanni will be a member of, and presumably the leader of, Team Rainbow Rocket. Team Rainbow Rocket will have their own castle as well as Grunts to battle, but this is only part of the story. The trailer also confirms the inclusion of at least the leaders of, if not more members of, Team Aqua, Team Magma, Team Galactic, Team Plasma and Team Flare. It is not yet clear to what extent all these teams will be involved in Pokémon Ultra Sun and Ultra Moon.

The trailer shows off a few more new features as well. One of these is called The Battle Agency and looks to be Pokémon Ultra Sun and Ultra Moon‘s Battle Tower or Battle Frontier. Here, the player will rent Pokémon, possibly even Legendary Pokémon, for battling against strong trainers. There will also be new collectible items called Totem Stickers hidden all around Alola. After collecting enough stickers, players will be able to attain Totem-sized Pokémon to use in battle themselves. Also, a feature called Island Scan will allow players to run into Pokémon that wouldn’t normally appear in Alola, including starters from previous generations.

Lastly, a whole slew of Legendary Pokémon have been confirmed catchable in Pokémon Ultra Sun and Ultra Moon. These include Mewtwo, Articuno, Zapdos, Moltres, Lugia, Ho-Oh, Entei, Raikou, Suicune, Kyogre, Groudon, Rayquaza, Latias, Latios, Registeel, Regirock, Regice, Dialga, Palkia, Azelf, Mesprit, Uxie, Regigigas, Cresselia, Heatran, Giratina, Reshiram, Zekrom, Kyurem, Cobalion, Terrakion, Virizion, Tornadus, Thundurus, Landorus, Yveltal, Xerneas and Zygarde. In other words, all non-event Legendaries will be available in these games. According to Serebii, however, several of these Legendaries will be version exclusives. Ho-Oh, Raikou, Groudon, Latios, Dialga, Heatran, Reshiram, Tornadus and Xerneas will be exclusive to Ultra Sun while Lugia, Entei, Kyogre, Latias, Palkia, Regigigas, Zekrom, Thundurus and Yveltal will be exclusive to Ultra Moon. Furthermore, some Legendaries, such as Suicune, Rayquaza, Kyurem and Landorus, will only appear when opposite version exclusive Legendaries are brought into the same game. For example, Suicune will only appear once the player has both Raikou and Entei, and Rayquaza will only appear when the player has both Groudon and Kyogre.

Pokémon Ultra Sun and Ultra Moon come out on November 17 for the 3DS.