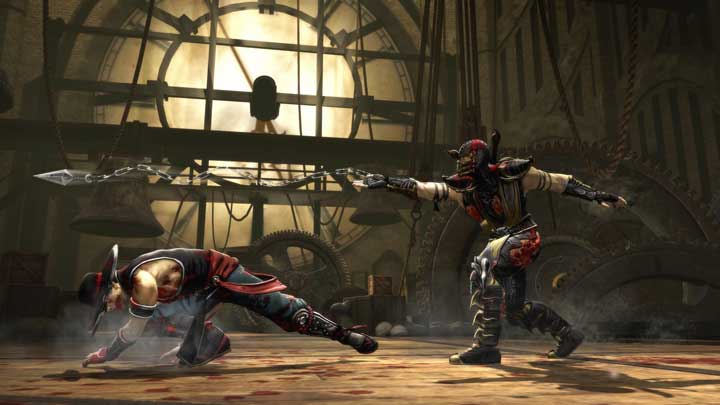 Prepare yourself to reenter the tournament in the triumphant return of Mortal Kombat. A complete reboot of the franchise, this latest iteration combines all-new mature oriented fighter gameplay with a deep story mode, improved graphics and game technology and new game modes to create a Mortal Kombat play experience like none before it. Feature details include: a storyline that takes players back to the original tournament, 4 player tag-team kombat, 3D TV compatibility, fatalities presented in graphic detail never imagined in earlier releases, enhanced online functionality and more.  Having literally defined the mature game category, Mortal Kombat makes a triumphant return to its violent roots in the fastest and most brutal installment to date.  – NetherRealm

The Mortal Kombat franchise is one of the longest running franchises in gaming.  Originally released back in 1992, Mortal Kombat hit the arcade scene going head to head with the most popular fighting game of the time, Street Fighter 2.  The fighting game was on a fast track to popularity for a couple of reasons, but primarily the game had a shocking level of violence that had never been seen before.  Today, the video gaming landscape has changed.  We’ve grown accustumed to violence, blood and nudity in our games.  Who you have to thank for pathing the way for this, is probably Mortal Kombat and Splatterhouse.  While we might be used to seeing violence on our screens, Mortal Kombat once again ups the ante in this department.

In the era of HD entertainment gore has never looked so good as it does in Mortal Kombat 9.  In match, Mortal Kombat hangs with any fighter on the market when it comes to graphics.  Beautifully rendered stages feature a range of backdrops that vary from the macabre to the strange and everything in-between.  If you can keep your eyes on the action at hand, you’ll find that character models, their animations, and specials are extremely well done.  The action on hand is a hybrid between the traditional Mortal Kombat 2-D design and a more three dimensional view in some circumstances.  A character can be sent reeling into the background only to spring back into the arena seamlessly and as fatalities and x-ray moves are performed the game switches to a three dimensional mode ala Street Fighter.  One really interesting point about the fighting is the damage modelling of the fighters.  As a fight progresses, your character will be beaten, bruised, and bloodied and he stays that way until the end of the fight.  In most circumstances, even if your fighter comes out on top, he looks like he got run over by a tractor.  This real time damage modelling is something that really ties together the two rounds of a fight and makes MK9 standout in the graphics department.   What really takes Mortal Kombat over the top however is once again the Fatalities, X-Ray moves, and other unlockable finishing moves that you can perform to fully embarrass your opponent.

Old hands at Mortal Kombat will feel right at home in Mortal Kombat 9.  The fast paced combination/juggle driven combat has a very familiar feel.  Even some of the original fatalities have been brought back for the revival of the franchise.  As a newcomer, you’ll likely be hooked in the same manner that the game hooked so many fighting game fans all those years ago.  Though with so many fighters now on the roster there will be plenty for the newcomer to learn.

The basics however aren’t hard to figure out.  There’s a Front and Back Punch a Front and Back Kick which are initially mapped to the face of the controller.  A throw button and tag button which are mapped to the bumpers, and blocking will require you to hold the right trigger.  For the newcomer, many short combinations can be figured out by trying any number of combinations for quick 2-3 hit combos.  Though as you become a more proficient fighter in Mortal Kombat 9, you’ll learn that the game has a lot more to it with the inclusion of the three part meter that fills throughout your match from dealing and taking damage.  The bar which fills in three tiers will allow you to pull off Special Attacks, Enhanced Attacks, and finally when the meter fills, an X-Ray attack.  The X-Ray attacks may be the most visually stimulating of the bunch as you’ll see an x-ray view of the skull crunching damage your attack is doing to the innards of your opponent.  There’s definitely a great level of polish on all of the x-ray moves and fatalities/finishing moves that makes learning and seeing all of them a priority once you get started.

There is certainly a lot to do in Mortal Kombat 9.  The game has plenty to keep you busy from multiple single player offerings, to online modes that allow you to observe and interact with the on-screen action of two fighters duking it out cinema-style.  If you just want to get in a get it on with a computer opponent the traditional Mortal Kombat ladder style single player mainstay is back.  As well as a Tag Ladder to tackle the single player with two fighters utilizing tag combo moves.  Then there’s a wide arrangement of mini-game style challenges in the Test Your Luck, Test Your Might, Test Your Sight, and Test Your Strike modes.  In Test Your Luck, you’ll spin slot machine wheels that add modifiers to the combat.  In Test Your Might, you’ll be tasked with breaking increasingly difficult objects by rapidly pressing the buttons on the face of the controller and then hitting the trigger to attempt a break.  Test Your Sight is three card monty with human heads, where you’ll be tasked with keeping your eye on the ball.  Test Your Strike is a variation of Test Your Might, where precision is more important than just strength.

Also in the single player portion of the game is a Story Mode.  Here you’ll get up to speed on what is going on in the world of Mortal Kombat and who all these characters are.  The mode will introduce you to many characters in the game, and explain the Earthrealm and Outworld characters.  It’s actually one of the better Story modes for a fighting game considering that Mortal Kombat has such a large catalouge of lore to explain.

The challenge tower is also a single player experience that will have you trying your hand at the many different elements of Mortal Kombat.  You’ll be asked to complete objectives within specific time constraints, fight multiple fighters, complete Test Your Blank challenges, and even perform weird mini-game style challenges that can at times, be harder than the fighting.  The challenge tower is long and gruelling but you’ll earn plenty of Kombat currency to be spent in the Krypt.

Regardless of which single player mode that you tackle, you’ll be earning kombat points that can be spent in the game’s  Krypt.  The Krypt is split into a few areas that contains many unlockables for the game, like character fatalities, game modes, and slew of other neat unlockables.  It’s a grab bag of sorts.  You’ll purchase items that vary in price and when they unlock you’ll find out what you’ve won.  There are around 500 unlockables to purchase so trying to grab them all might take you a little while as they get increasingly more expensive as you go.

Before heading online, you can hit the training section to perfect your combos, juggles,  and fatalities so you don’t choke up when you face the online community.  Once ready however, you’ll need to enter your online pass that is included in the game to access the online arena where there are quite a few options as well.  Your standard Ranked, Player, and Private Matches are available as well as Lobbies where you can challenge members in different realms.  You can chat with other lobby members there as well and also view statistics of your opponents.  A nice alternative to matchmaking and one that I think should be included in all games of this nature.

If you have a group of players that want to play together and what each other fight, the King of the Hill mode is great.  Working surprisingly well, this unique mode will allow you to watch the on-screen action by way of a cinema screen and interact with the on-going action.  You can boo, cheer, and rate your opponents as you watch the map and wait in que for your chance at the King of the Hill.

There really is a lot to get through with Mortal Kombat 9, a ton of stuff to do, learn, and accomplish will keep you busy for quite some time.

As good as the graphics are during the fights of Mortal Kombat, the cutscene graphics seem to be lacking some of that same polish.  This is most notable in the story mode that is more cut-scene laden the rest of the game.  Is it a deal breaker?  No.  You most likely won’t be spending the majority of your time with the Story mode of the game, if any.  However if you do, you’ll likely see what I mean.

Mortal Kombat has never been about high level competitive play as much as many fans of the series would like to see that direction taken.  It has been a notorious button masher where even the lowest level beginners can come in, deal serious damage, and get their 25 cents worth of gore.  This is still the case with this iteration of Mortal Kombat.  It’s not quite the technical fighter that other games from Capcom and Tekken are, but those games aren’t really the same type of experience that Mortal Kombat is.  The game is a much more cinematic affair than it is a technical fighter, but please don’t misunderstand, there’s definitely going to be a proficiency gap between experienced players and newcomers and it’ll most notably be in the amount of moves committed to memory.

Whatever level of player you are will determine whether you appreciate this level of accessibility or not.

Sticking with the accessibility theme, some of the coolest and most damaging manuevers in the game are also the easiest accomplished.  So basically to pull off the x-ray moves that take 25-30 percent of your opponents health away, all you need to do is hold down the right and left triggers.  This is going to anger some, if just for the lack of skill required, and zero memorization neccessary to achieve.  There is a timing element involved but it’s fairly easy to pull of these moves once you know the timing of it since it requires nothing else.

Expect that these are spammed heavily in the online portions of the game.  It makes for a very cinematic match, and they look cool as hell, but they can best be described by fighting game fans as cheese.

Mortal Kombat 9 is a triumphant return to the genre for the series.  This game is going to rekindle your love for the franchise at first glance with an exceptionally designed package.  Polished from head to nearly toe, it’s only small flaws are but minor nusances in an otherwise fun and beautiful game.  With so much to do in Mortal Kombat you’ll be busy for a while trying to track down each and every morsel of beautiful gore.