The latest news in the world of video games at Attack of the Fanboy
October 17th, 2014 by Damian Seeto 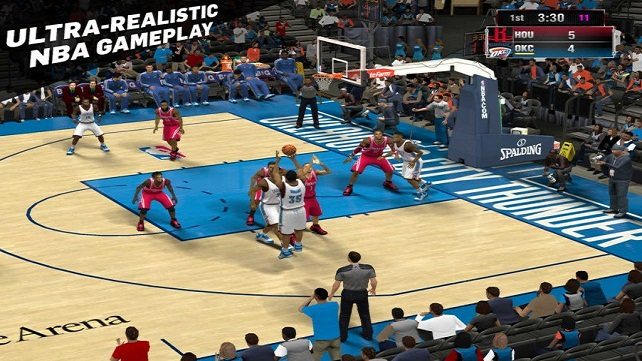 Just over a week after NBA 2K15 came out on PC and consoles, the game has now been released for several mobile devices.

The mobile version of NBA 2K15 is actually pretty fleshed out. Graphically, the game is similar in look to the PS3 and Xbox 360 versions. There is also a “Quick Game” mode and also the MyCareer mode too. The MyCareer mode is cool as you can create a nobody player and try and turn them into a a top tier NBA star.

The controls are mapped onto the touch screen and you also hear the same NBA 2K15 soundtrack that was curated by Pharrell Williams himself. The mobile version of the game is also the cheapest out in the market. It will only cost you $8 to download in North America.

With our latest NBA 2K15 mobile experience, fans have an opportunity to experience NBA action anywhere, anytime, in the palm of their hand,” Visual Concepts President Greg Thomas said. “We are thrilled to bring NBA 2K’s ultra-realistic gameplay and popular game modes to handheld devices.”

NBA 2K15 for mobile devices will be compatible on iOS devices and various Amazon devices. It’s worth downloading if you don’t have access to the other versions of the game.