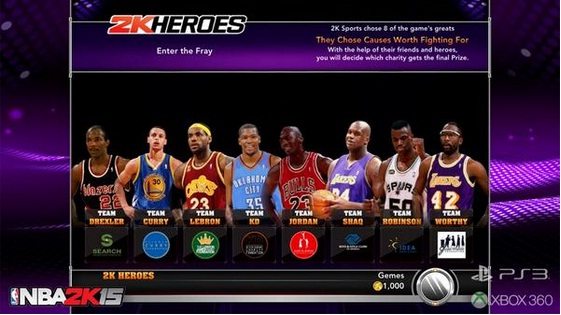 During the Gamestop Expo happening this week, 2K Sports is announcing a special mode that will be available for the PS3 and Xbox 360 versions of NBA 2K15.

Speaking of the “2K Heroes” mode for NBA 2K15, more information will be shared later today. We’ll be sure to update you on the news when it comes.

The first screenshot of 2K Heroes in NBA 2K15 looks very interesting as it involves many players. The eight NBA players you can be are: Clyde Drexler, Stephen Curry, LeBron James, Kevin Durant, Michael Jordan, Shaquille O’Neal, David Robinson and James Worthy. They will all be captains for their respective teams.

You get to play as one of these great NBA players in NBA 2K15 and decide which charity of their choosing “gets the final prize”. It sounds every exciting and noble as well. Your victory will determine where 2K Sports will make a donation.