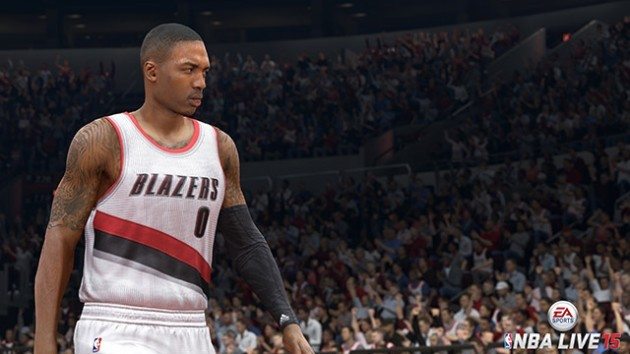 While the NBA 2K series has been dominating the sport in gaming for years now, EA Sports decided to give it another go with NBA Live 14 last November. Surprisingly, the game was released as a Xbox One and PlayStation 4 exclusive, choosing to forgo last-gen completely. The game wasn’t terrible, but definitely was missing a lot and could have used a huge graphical upgrade. With one year under the new team’s belt, NBA Live 15 is looking a lot better and GameInformer has released a list of 20 things that should be known about the game from their hands-on experience with the game.

Perhaps one of the most important elements in the game is the new scanning technology to help with the player models, which is said to address every single asset in the game, including both the players’ bodies themselves as well as their clothing and accessories. While seeming like an extremely small detail, players now have eyes that will follow the ball, which adds a lot more life to the game rather than the lifeless players we saw in NBA Live 14.

On the gameplay side, EA Sports has added a lot more control in the passing game, that of which we haven’t seen much since NBA Live 10. One of the most annoying aspects of last year’s game was when the animations would screw up and have shots be taken with player’s backs to the basket, but that has been changed to where it shouldn’t be happening at all, with a large emphasis on traditional animations.

Taking a look at game modes in NBA Live 15, Live Seasons and Big Moments will see a bigger focus this year in the game, which was one of the more fun elements of last year’s entry for sure. Dynasty mode is said to not get anywhere near as much focus in the development cycle anymore, due to the rise of more popular game modes, but they have worked hard to make sure that dynasty is much more realistic this time. You won’t see strange and dumb trades occurring in the game, as well as having the right teams winning instead of it being really strange and random most of the time.

If you want to read the full list of 20 things, you can check them out right here and look for NBA Live 15 to hit Xbox One and PlayStation on October 7.